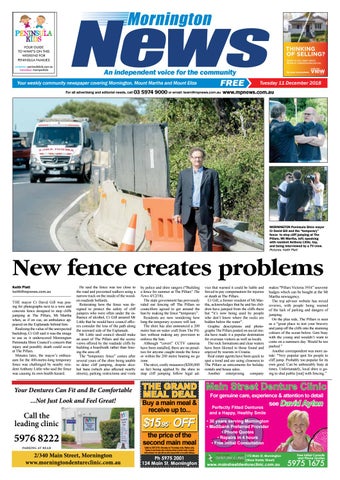 Mornington YOUR GUIDE TO WHAT’S ON THIS WEEKEND FOR PENINSULA FAMILIES FACEBOOK:

New fence creates problems Keith Platt keith@mpnews.com.au THE mayor Cr David Gill was posing for photographs next to a wire and concrete fence designed to stop cliffs jumping at The Pillars, Mt Martha when, as if on cue, an ambulance appeared on the Esplanade behind him. Realising the value of the unexpected backdrop, Cr Gill said it was the image to use as it underscored Mornington Peninsula Shire Council’s concern that injury and possibly death could occur at The Pillars. Minutes later, the mayor’s enthusiasm for the 400-metre-long temporary fence was challenged by nearby resident Anthony Little who said the fence was causing its own health hazard.

He said the fence was too close to the road and prevented walkers using a narrow track on the inside of the wooden roadside bollards. Reiterating how the fence was designed to protect the safety of cliff jumpers who were often under the influence of alcohol, Cr Gill assured Mr Little that he would have council officers consider the loss of the path along the seaward side of the Esplanade. Mr Little said council should make an asset of The Pillars and the scenic views offered by the roadside cliffs by building a boardwalk rather than fencing the area off. The “temporary fence” comes after several years of the shire being unable to deter cliff jumping, despite alcohol bans (which also affected nearby streets), parking restrictions and visits

Your Dentures Can Fit and Be Comfortable ...Not Just Look and Feel Great!

by police and shire rangers (“Building a fence for summer at The Pillars” The News 4/12/18). The state government has previously ruled out fencing off The Pillars so councillors agreed to get around the ban by making the fence “temporary”. Residents are now wondering how long the temporary eyesore will last. The shire has also announced a 200 metre ban on water craft from The Pillars without making any provision to enforce the ban. Although “covert” CCTV cameras have been installed, there are no penalties for anyone caught inside the fence or within the 200 metre boating no go zone. The strict, costly measures ($200,000 so far) being applied by the shire to stop cliff jumping follow legal ad-

the price of the second main meal Valid to 20/12/18. Monday to Thursday only. Bistro only.

vice that warned it could be liable and forced to pay compensation for injuries or death at The Pillars. Cr Gill, a former resident of Mt Martha, acknowledges that he and his children have jumped from the cliffs there but “it’s now being used by people who don’t know where the rocks are hidden below the water”. Graphic descriptions and photographs The Pillars posted on social media have made it a popular destination for overseas visitors as well as locals. The rock formations and clear waters have been likened to those found and enjoyed by tourists in Croatia. Real estate agents have been quick to spot a trend and are using closeness to The Pillars as enticements for holiday rentals and house sales. Another enterprising company

makes “Pillars Victoria 3934” souvenir badges which can be bought at the Mt Martha newsagency. The trip advisor website has mixed reviews, with people being warned of the lack of parking and dangers of jumping. On the plus side, The Pillars is seen as a “great place to test your bravery and jump off the cliffs into the stunning colours of the ocean below. Gets busy with the young and wouldn’t want to come on a summers day. Would be too packed.” Another correspondent was more astute: “Very popular spot for people to cliff jump. Probably too popular for its own good. Can be unbearably busy at times. Unfortunately, local shire is going to shut public [out] with fencing.”