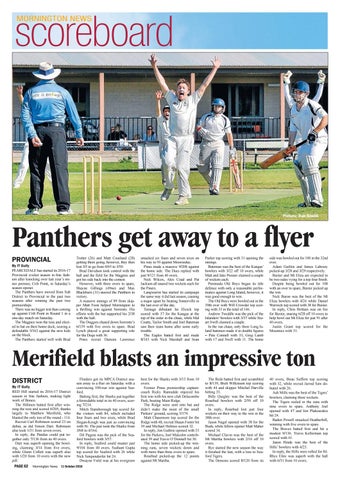 Panthers get away to a flyer PROVINCIAL By IT Gully PEARCEDALE has started its 2016-17 Provincial cricket season in fine fashion after knocking over last year’s minor premier, Crib Point, in Saturday’s season opener. The Panthers have moved from Sub District to Provincial in the past two seasons after winning the past two premierships. There was no bigger test than coming up against Crib Point in Round 1 in a one-day match on Saturday. The Magpies won the toss and elected to bat on their home deck, scoring a defendable 5/162 against the new kids on the block. The Panthers started well with Brad

Trotter (26) and Matt Cousland (28) getting them going, however, they then lost 3/5 to go from 0/45 to 3/50. Brad Davidson took control with the ball and the field for the Magpies and got his side back into the contest. However, with three overs to spare, Shayne Gillings (49no) and Max Blackburn (31) steered the Panthers to victory. A massive innings of 89 from skipper Matt Foon helped Mornington to a thrilling win against Sorrento. His efforts with the bat supported his 2/38 with the ball. The Doggies chased down Sorrento’s 6/159 with five overs to spare. Brad Lynch played a great supporting role for the Dogs with 36. Pines recruit Damien Lawrence

smacked six fours and seven sixes on his way to 93 against Moorooduc. Pines made a massive 9/208 against the home side. The Ducs replied with just 9/121 from 40 overs. Nick Wilcox, Alex Coad and Pat Jackson all snared two wickets each for the Piners. Langwarrin has started its campaign the same way it did last season, causing a major upset by beating Somerville in the last over of the day. Teenage debutant Jai Elcock top scored with 37 for the Kangas at the top of the order in the chase, while Mal Coutts, Taylor Smith and Joel Bateman saw their team home after some early trouble. The Eagles batted first and made 8/145 with Nick Marshall and Sean

Parker top scoring with 31 opening the innings. Bateman was the best of the Kangas’ bowlers with 3/22 off 10 overs, while Matt and Jake Prosser claimed a couple of wickets each. Peninsula Old Boys began its title defence with only a reasonable performance against Long Island, however, it was good enough to win. The Old Boys were bowled out in the 39th over with Will Crowder top scoring with 33 in the total of 146. Andrew Tweddle was the pick of the Islanders’ bowlers with 3/37 while Stuart Swift claimed a couple. In the run chase, only three Long Island batsmen made it to double figures – Pete Connell with 33, Greg Lamb with 17 and Swift with 11. The home

side was bowled out for 100 in the 32nd over. Adam Gailitis and James Labrooy picked-up 3/28 and 3/29 respectively. Baxter and Mt Eliza are expected to be two sides vying for a top four finish. Despite being bowled out for 108 with an over to spare, Baxter picked up the win. Nick Baron was the best of the Mt Eliza bowlers with 4/24 while Daniel Warwick top scored with 38 for Baxter. In reply, Chris Brittain was on fire for Baxter, snaring 6/28 off 10 overs to help bowl out Mt Eliza for just 91 after 40 overs. Justin Grant top scored for the Mounties with 31.

Merifield blasts an impressive ton DISTRICT By IT Gully RED Hill started its 2016-17 District season in fine fashion, making light work of Boneo. The Hillmen batted first after winning the toss and scored 4/205, thanks largely to Matthew Merifield, who blasted the only ton of the round - 114. Recruit Carl Robinson scored 23 on debut, as did Simon Dart. Robinson also took 1/31 from seven overs. In reply, the Pandas could put together only 7/136 from its 40 overs. Dart was superb opening the bowling, claiming 3/14 from five overs, while Glenn Collett was superb also with 1/20 from 10 overs with the new pill.

Flinders got its MPCA District season away to a flier on Saturday with a convincing 100-run win against Seaford. Batting first, the Sharks put together a formidable total in its 40 overs, scoring 7/214. Mitch Stansborough top scored for the visitors with 84, which included four fours and two sixes, while Brad Hogan-Keogh was just as convincing with 56. The pair took the Sharks from 3/68 to 4/164. Dil Pageni was the pick of the Seaford bowlers with 3/57. In reply, Seaford could muster just 9/104 from 40 overs. Sushant Gupta top scored for Seaford with 26 while Nick Simpendorfer hit 24. Dwayne Field was at his evergreen

best for the Sharks with 3/15 from 10 overs. Former Pines premiership captaincoach Ricky Ramsdale enjoyed his first win with his new club Delacombe Park, beating Main Ridge. The Ridge were sent into bat and didn’t make the most of the small Parkers’ ground, scoring 5/174. Matt Chasemore top scored for the Ridge with 48, recruit Shaun Foster hit 39 and Michael Holmes scored 32. In reply, Jon Guthrie opened with 55 for the Parkers, Joel Malcolm contributed 39 and Travis O’Donnell hit 30. The home side picked-up the winning runs, seven wickets down and with more than three overs to spare. Rosebud picked-up the 12 points against Mt Martha.

The Reds batted first and scrambled to 8/139, Brett Wilkinson top scoring with 44 and skipper Mitchel Darville hitting 35. Billy Quigley was the best of the Rosebud bowlers with 2/50 off 10 overs. In reply, Rosebud lost just four wickets on their way to the win in the 38th over. Jason Nagel opened with 38 for the Buds, while fellow opener Matt Maher scored 34. Michael Clavin was the best of the Mt Martha bowlers with 2/16 off 10 overs. Rye started the new season the way it finished the last, with a loss to Seaford Tigers. The Demons scored 8/120 from its

40 overs, Beau Suffern top scoring with 32, while recruit Jarrod Saw debuted with 26. Ash Mills was the best of the Tigers’ bowlers, claiming three wickets. The Tigers reeled in the runs with nine overs to spare. Anthony Joel opened with 47 and Jon Plakourakis hit 24. Baden Powell smacked Heatherhill, winning with five overs to spare. The Braves batted first and hit a modest 9/136. Travis Kellerman top scored with 41. Jason Hinde was the best of the Hills’ bowlers with 4/25. In reply, the Hills were rolled for 84. Rhys Elmi was superb with the ball with 6/31 from 10 overs.