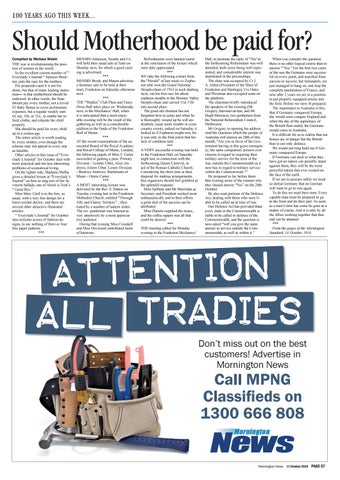 Should Motherhood be paid for? Compiled by Melissa Walsh THE war is revolutionising the position of women in the world. In the excellent current number of “ Everylady’s Journal “ Spencer Brodney puts the case for the mothers. His proposal—and it is not his alone, but that of many leading statesmen— is that motherhood should be endowed. In other words, the State should pay every mother, not a trivial £5 Baby Bonus to cover preliminary expenses, but a regular weekly sum of, say, 10s. or 12s., to enable her to feed, clothe, and educate the child properly. She should be paid for every child up to a certain age. The entire article is worth reading by every mother, even though the scheme may not appeal to every one as feasible. Other articles in this issue of “Everylady’s Journal” for October deal with more practical and not less interesting problems of economical living. On the lighter side, Madame Melba gives a detailed lesson in “Everylady’s Journal” on how to sing two of her favourite ballads, one of which is Tosti’s “ Good Bye.” Miss Mary Card is to the fore, as usual, with a very fine design for a linen crochet doyley; and there are several other attractive illustrated articles. ‘’ Everylady’s Journal” for October also includes scores of fashion designs, to say nothing of three or four free paper patterns. ***

MESSRS Adamson, Strettle and Co. will hold their usual sale at Tanti on Monday next, for which a good yarding is advertised. *** MESSRS Brody and Mason advertise a furniture sale to be held at their mart, Frankston on Saturday afternoon next. *** THE “Wattles” Club Plain and Fancy Dress Ball takes place on Wednesday next, in the Mechanics’ Hall, when it is anticipated that a most enjoyable evening will be the result of the gathering as well as a considerable addition to the funds of the Frankston Roll of Honor. *** AT the recent examinations of the associated Board of the Royal Academy and Royal College of Music, London, the following pupils of Miss T. Carter succeeded in gaining a pass. Primary Division - Lynette Utber, Alice Andrews, Eileen Utber. Lower Division - Beatrice Andrews. Rudiments of Music - Glorie Carter. *** A MOST interesting lecture was delivered by the Rev. E Tonkin on Tuesday evening last in the Frankston Methodist Church, entitled “Through Ally and Enemy Territory” , illustrated by a number of lantern slides. The rev. gentleman was listened to very attentively by a most appreciative audience. During that evening Miss Crosskell and Miss Heywood contributed items of harmony.

Refreshments were handed round at the conclusion of the lecture which were duly appreciated. *** WE take the following extract from the “Herald” of last week:— Zephuron who won the Grand National Steeple-chase of 1914 in such dashing style, ran his first race for about eighteen months in the Mooney Valley Steeple-chase and carried 11st 11lb into second place. The good old chestnut has not forgotten how to jump and when he is thoroughly wound up he will undoubtely cause some trouble in cross country events, indeed on Saturday it looked as if Zephuron might win, for it was only in the final pinch that his lack of condition told. *** A VERY successful evening was held in the Frankston Hall, on Saturday night last, in connection with the forthcoming Queen Carnival, in aid of the Roman Catholic Church. Considering the short time at their disposal for making arrangements, thie organizers should feel gratified at the splendid response. Miss Spillane and Mr Sherridan as Secretary and President worked most enthusiastically and to their efforts a great deal of the success can be attributed. Miss Daniels supplied the music, and the coffee supper was all that could be desired. *** THE meeting called for Monday evening in the Frankston Mechanics’

Hall, to promote the reply of “Yes”at the forthcoming Referendum was well attended, both sexes being well represented, and considerable interest was manifested in the proceedings. The chair was occupied by Cr J. A. Alden (President of the Shire of Frankston and Hastings), Crs Oates and Plowman also occupied seats on the platform. The chairman briefly introduced the speakers of the evening (Mr Gregory, barrister-at-law, and Mr Hugh Menzies), two gentlemen from the National Referendum Council, Melbourne. Mr Gregory in opening his address read the Question which the people of Australia will answer on 28th of this month, “Are you in favor of the Government having in this grave emergency, the same compulsory powers over citizens in regard to requiring their military service for the term of the war, outside the Commonwealth as it now has in regard to military service within the Commonwealt ?” He proposed to lay before them that evening some of the reasons why they should answer “Yes” on the 28th October. He also read portions of the Defence Act, dealing with those who were liable to be called up at time of war. Our Defence Act has provided thaat every male in the Commonwealth is liable to be called in defence of the Commonwealth, and the question is now asked “will you give the same answer to service outside the Commonwealth, as well as within it.”

When you consider the question there is no other logical course than to answer “’Yes.” For the first two years of the war the Germans were successful on every point, and marched from success to success, but fortunately, we just managed to hang on, and stop the complete annihilation of France, and now after 2 years we are in a position to put properly equipped armies into the field. Before we were ill prepared. The importance to Australia is this, that if Germany conquered Europe, she would soon conquer England and when the day of the supremacy of the British fleet ended, the Germans would come to Australia. It is difficult for us to realise that our homes are in danger but the British fleet is our only defence. We would not long hold out if Germany conquered Europe. If Germany can stick to what they have got no nation can possibly stand against them; they will be the most powerful nation that ever existed on the face of the earth. If we are to procure safety we must so defeat Germany that no German will want to go to war again. To do this we must have men. Every capable man must be prepared to go to the front and do their part. As soon as a man’s time has come he goes as a matter of course. And it is only by all the Allies working together that that end can be attained. *** From the pages of the Mornington Standard, 14 October, 1916