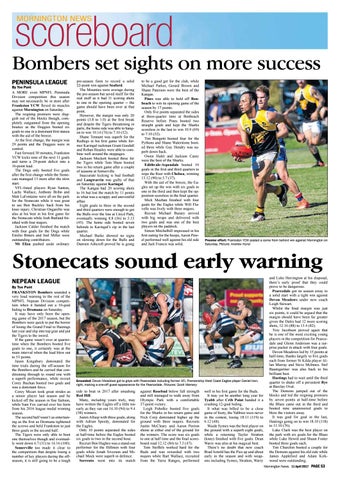 By Toe Punt A MORE even MPNFL Peninsula Division competition this season may not necessarily be in store after Frankston YCW flexed its muscles against Mornington on Saturday. The reigning premiers were sluggish out of the blocks though, completely outgunned from the opening bounce as the Doggies booted six goals to one in a dominant first stanza with the aid of the breeze. At the first change, the margin was 29 points and the Doggies were in control. Fast forward 30 minutes, Frankston YCW kicks nine of the next 11 goals and turns a 29-point deficit into a 16-point lead. The Dogs only booted five goals after the first change while the Stonecats managed 13 more after the slow start. VFL-listed players Ryan Santon, Lachy Wallace, Anthony Brihn and Matt LaFontaine were all on the park for the Stonecats while it was great to see Ben Buckley back from his knee injury. Christian Ongarello was also at his best in his first game for the Stonecats while Josh Butland finished with four majors. Jackson Calder finished the match with four goals for the Dogs while Emilio Bitters and Joel Miller were outstanding contributors. Mt Eliza pushed aside ordinary

pre-season form to record a solid 22-point win against Seaford. The Mounties were average during the pre-season but saved itself for the real stuff as it had 11 scoring shots to one in the opening quarter -- the game should have been over at that point. However, the margin was only 20 points (3.8 to 1.0) at the first break and despite the Tigers threatening in parts; the home side was able to hangon to win 10.14 (74) to 7.10 (52). Shane Tennant was superb for the Redlegs in his first game while former Karingal ruckman Grant Goodall and Rohan Heasley were able to combine well around the stoppages. Jackson Mockett booted three for the Tigers while Tom Shaw booted two in his return game after a couple of seasons at Somerville. Inaccurate kicking is bad football and Langwarrin was guilty of that on Saturday against Karingal. The Kangas had 20 scoring shots to 16 but lost the match by 11 points in what was a scrappy and uneventful affair. Eight goals to three in the second and third quarters were enough to get the Bulls over the line at Lloyd Park, eventually winning 8.8 (56) to 5.15 (45). The home side booted seven behinds to Karingal’s zip in the last quarter. Michael Burke showed no signs on slowing down for the Bulls and Damien Ashcroft proved he is going

to be a good get for the club, while Michael Parker, Gerard Brown and Shane Paterson were the best of the Kangas. Pines was able to hold off Bonbeach to win its opening game of the season by 17 points. Only five points separated the sides at three-quarter time at Bonbeach Reserve before Pines booted two straight goals and kept the Sharks scoreless in the last to win 10.9 (69) to 7.10 (52). Tim Bongetti booted four for the Pythons and Shane Waterstone booted three while Guy Hendry was superb down back. Owen Hulet and Jackson Casey were the best of the Sharks. Edithvale-Aspendale booted 10 goals in the first and third quarters to wipe the floor with Chelsea, winning 13.12 (90) to 5.7 (37). With the aid of the breeze, the Eagles set up the win with six goals to one in the third and then kept the opposition scoreless in the final quarter. Mick Meehan finished with four goals for the Eagles while Will Flavelle was lively with three majors. Recruit Michael Bussey arrived with big wraps and delivered with two goals and was one of the best players on the paddock. Simon Mitchelhill impressed in his first outing for the hoops, Aaron Pawel performed well against his old side and Jack Francis was solid.

By Toe Punt FRANKSTON Bombers sounded a very loud warning to the rest of the MPNFL Nepean Division competition when it handed out a 10-goal hiding to Dromana on Saturday. It may have only been the opening game of the 2017 season, but the Bombers were quick to put the horror of losing the Grand Final to Hastings last year and slip into top gear and put the Tigers to the sword. If the game wasn’t over at quartertime when the Bombers booted five goals to one, it certainly was at the main interval when the lead blew out to 53 points. Jason Kingsbury dominated the time trials during the off-season for the Bombers and he carried that conditioning through to round one with a superb performance, while recruit Corey Buchan booted two goals and was a dominant force. Corey Micari took great strides as a senior player last season and he kicked off the season in fine fashion, while Sam Fox carried over his form from his 2016 league medal winning season. The second half wasn’t as entertaining as the first as Dromana tightened the screws and held Frankston to just three goals in the second half. The Tigers were only able to boot one themselves though and eventually went down 4.7 (31) to 14.16 (100). Somerville too made it clear to the competition that despite losing a number of key players during the offseason, it is still going to be a tough

side to beat in 2017 after smashing Red Hill. Many, including yours truly, may have written the Eagles off a little too early as they ran out 14.10 (94) to 9.4 (58) winners. Justin Allsop with three goals, along with Adrian Speedy, dominated for the Eagles. Only 10 points separated the sides at half-time before the Eagles booted six goals to two in the second hour. Recruit Ben Hughes was a stand-out performer for the Hillmen with four goals while Jonah Siverson and Michael Mock were superb in defence. Sorrento went into its match

against Rosebud below full strength and still managed to walk away from Olympic Park with a comfortable 37-point victory. Leigh Poholke booted five goals for the Sharks in his return game and Nick Corp dominated higher up the ground with three majors. Recruits Justin McCleary and Aaron Paxton shone at either end of the ground for the winners. The score was six goals to one at half time and the final scoreboard read 12.12 (84) to 7.5 (47). Tom Stoffels worked hard for the Buds and was rewarded with two majors while Bart Wallace, recruited from the Yarra Ranges, performed

well in his first game for the Buds. It may yet be another long year for Tyabb after Crib Point handed it a crushing 12-goal hiding. It what was billed to be a close game of footy, the Yabbies were never in the contest, losing 18.11 (119) to 6.12 (48). Waide Symes was the best player on the ground with a superb eight goals, while a returning Taylor Stratton (knee) finished with five goals. Dean Warry was also at his magical best. There’s no doubt that new coach Brad Arnold has the Pies up and about early in the season and with weapons including Symes, Stratton, Warry

and Luke Herrington at his disposal, there’s early proof that they could prove to be dangerous. Pearcedale got its season away to a solid start with a tight win against Devon Meadows under new coach Leigh Stewart. Whilst the final margin was just six points, it could be argued that the margin should have been far greater given the Dales had 12 more scoring shots, 12.16 (88) to 13.4 (82). Troy Jacobson proved again that he is one of the most exciting young players in the competition for Pearcedale and Glenn Anderson was a surprise packet in attack with four goals. Devon Meadows led by 15 points at half-time, thanks largely to five goals each from former St Kilda player Allan Murray and Steve McInnes. Stef Baumgartner was also back to his brilliant best. Hastings had to wait until the third quarter to shake off a persistent Rye at Barclay Oval. The Demons jumped out of the blocks and led the reigning premiers by seven points at half-time before the Blues came out in the third and booted nine unanswered goals to blow the visitors away. It was goal for goal in the last, Hastings going on to win 18.10 (118) to 11.10 (76). Luke Clark was the best player on the park with six goals for the Blues while Luke Hewitt and Shaun Foster booted three goals each. Tim Churchin booted a couple for the Demons against his old side while James Appleford and Adam Kirkwood were outstanding. Mornington News 11 April 2017