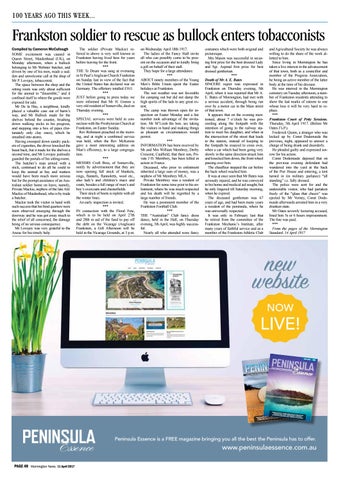 Frankston soldier to rescue as bullock enters tobacconists Compiled by Cameron McCullough SOME excitement was caused in Queen Street, Maidenhead (UK), on Monday afternoon, when a bullock belonging to Mr Webster butcher, and driven by one of his men, made a sudden and unwelcome call at the shop of Mr P. Lovejoy, tobacconist. The space between the shop and the sitting room was only about sufficient for the animal to “dissemble,” and it confined itself to where the goods were exposed for sale. Mr De la Hay, a neighbour, kindly placed a valuable case out of harm’s way, and Mr Bullock made for the shelves behind the counter, brushing down walking sticks in his progress, and stepping into a box of pipes (fortunately only clay ones), which he smashed into atoms. Having swooped down sundry packets of cigarettes, the driver knocked the beast back, but it made for the shelves a second time, and Mr Lovejoy jealously guarded the portals of his sitting-room. The butcher’s man armed with a stick, continued to do all he could to keep the animal at bay and matters would have been much more serious but for the prompt assistance of an Australian soldier home on leave, namely, Private Mackie, nephew of the late Ald. Mackie of Maidenhead, who is by trade a butcher. Mackie took the visitor in hand with such success that his hind quarters were soon observed emerging through the doorway and he was got away much to the relief of all concerned, the damage being of no serious consequence. Mr Lovejoy was very grateful to the Anzac for his timely help.

The soldier (Private Mackie) referred to above is very well known in Frankston having lived here for years before leaving for the front. *** THE Te Deum was sung at evensong in St Paul’s Anglican Church Frankston on Sunday last in view of the fact that the United States has declared war on Germany. The offertory totalled £163. *** JUST before going to press today we were informed that Mr H. Gomm a very old resident of Somerville, died on Thursday evening. *** SPECIAL services were held in connection with the Presbyterian Church at Frankston, on Easter Sunday. Rev Robinson preached in the morning, and at night a combined service was held, when the Rev McKenzie gave a most interesting address on Man’s efficiency, to a large congregation. *** MESSRS Croft Bros, of Somerville, notify by advertisement that they are now opening full stock of blankets, rings, flannels, flannoletts, wool etc., also lady’s and children’s macs and coats, besides a full range of men’s and boy’s overcoats and chesterfields. Their stock of boots is replete with all the winter lines. An early inspection is invited. *** IN connection with the Floral Fete, which is to be held on April 27th and 28th in aid of the fund to pay off the debt on the Vicarage (Anglican) Frankston, a Gift Afternoon will be held in the Vicarage Grounds, at 3 p.m.

on Wednesday April 18th 1917. The ladies of the Fancy Stall invite all who can possibly come to be present on the occasion and to kindly bring a gift on behalf of their stall. They hope for a large attendance. *** ABOUT ninety members of the Young Men’s Bible Union spent the Easter holidays at Frankston. The wet weather was not favorable for camping out but did not damp the high spirits of the lads to any great extent. The camp was thrown open for inspection on Easter Monday and a fair number took advantage of the invitation. Mr M’Leish the hon. sec taking the visitors in hand and making things as pleasant as circumstances would permit. *** INFORMATION has been received by Mr and Mrs William Membrey, Derby Crescent, Caulfield, that their son, Private J H. Membrey, has been killed in action in France. Deceased, who prior to enlistment inherited a large sum of money, was a nephew of Mr Membrey MLA. Private Membrey was a resident of Frankston for some time prior to his enlistment, where be was much respected and his death will be regretted by a large number of friends. He was a prominent member of the Frankston Football Club. *** THE “Australian” Club fancy dress dance, held in the Hall, on Thursday evening, 5th April, was highly successful. Nearly all who attended wore fancy

costumes which were both original and picturesque. Mrs Mason was successful in securing first prize for the best dressed Lady and Sgt. Aspinal first prize for best dressed gentleman. *** Death of Mr A. E. Bates SINCERE regret was expressed in Frankston on Thursday evening, 5th April, when it was reported that Mr A. E. Bates of Mornington, had met with a serious accident, through being run over by a motor car in the Main street of that town. It appears that on the evening mentioned, about 7 o’clock he was proceeding along the footpath with the intention of going to the railway station to meet his daughter, and when at the intersection of the street that leads to the station, instead of keeping to the footpath he essayed to cross over, when a car which had been going very slowly in the same direction struck him and knocked him down, the front wheel passing over him. The chauffeur stopped the car before the back wheel reached him. It was at once seen that Mr Bates was seriously injured, and he was conveyed to his home and medical aid sought, but he only lingered till Saturday morning, when he expired. The deceased gentleman was 67 years of age, and had been many years a resident of the peninsula, where he was universally respected. It was only in February last that he retired from the committee of the Frankston Mechanic’s Institute, after many years of faithful service and as a member of the Frankston Athletic Club

and Agricultural Society he was always willing to do the share of the work allotted to him. Since living in Mornington he has taken a live interest in the advancement of that town, both as a councillor and member of the Progress Association, he being an active member of the latter body at the time of his decease. He was interred in the Mornington cemetery on Tuesday afternoon, a number of Frankston residents attending to show the last marks of esteem to one whose loss it will be very hard to replace. *** Frankston Court of Petty Sessions. Thursday, 5th April 1917. (Before Mr Oates J’s.P.). Frederick Quinn, a stranger who was locked up by Const Dodemaide the previous, night, appeared to answer a charge of being drunk and disorderly. He pleaded guilty and expressed sorrow for his action. Const Dodemaide deposed that on the previous evening defendant had wandered into the yard at the back of the Pier House and entering, a tent turned in (in military parlance) “all standing” i.e. fully dressed. The police were sent for and the undesirable visitor, who had partaken freely of the “glass that cheers” was ejected by Mr Verney, Const Dodemaide afterwards arrested him in a very drunken state. Mr Oates severely lecturing accused, fined him 5s or 6 hours imprisonment. The fine was paid. *** From the pages of the Mornington Standard, 14 April 1917

Peninsula Essence is a FREE magazine bringing you all the best the Peninsula has to offer.