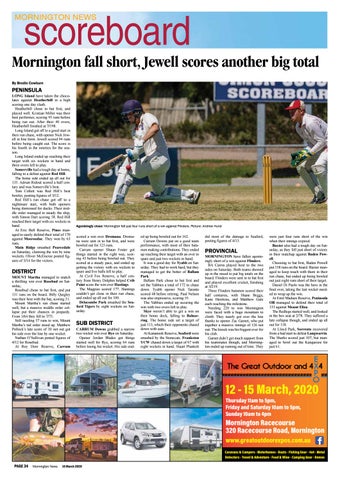 LONG Island have taken the chocolates against Heatherhill in a high scoring one day clash. Heatherhill chose to bat first, and played well. Kristian Miller was their best performer, scoring 95 runs before being run out. After their 40 overs, Heatherhill finished at 7/198. Long Island got off to a good start in their run chase, with opener Nick Jewell in fine form. Jewell scored 94 runs before being caught out. The score is his fourth in the nineties for the season. Long Island ended up reaching their target with six wickets in hand and three overs left to play. Somerville had a tough day at home, falling to a defeat against Red Hill. The home side ended up all out for 135. Adrian Ridout scored a half century and was Somerville’s best. Tom Collett was Red Hill’s best bowler, posting figures of 3/12. Red Hill’s run chase got off to a nightmare start, with both openers being dismissed for ducks. Their middle order managed to steady the ship, with Simon Dart scoring 58. Red Hill reached their target with six wickets in hand. At Eric Bell Reserve, Pines managed to easily defend their total of 170 against Moorooduc. They won by 63 runs. Main Ridge smashed Pearcedale on Saturday, claiming the win by nine wickets. Oliver McEncroe posted figures of 5/14 for the victors.

MOUNT Martha managed to snatch a thrilling win over Rosebud on Saturday, Rosebud chose to bat first, and put 131 runs on the board. Billy Quigley was their best with the bat, scoring 51. Mount Martha’s run chase started well, but a massive middle order collapse put their chances in jeopardy. From 1/64 they fell to 7/75. Still needing 57 runs to win, Mount Martha’s tail order stood up. Matthew Pollock’s late score of 30 not out got his side over the line by one wicket. Nathan O’Sullivan posted figures of 4/12 for Rosebud. At Roy Dore Reserve, Carrum

scored a win over Dromana. Dromana were sent in to bat first, and were bowled out for 125 runs. Carrum opener Shaun Foster got things started in the right way, scoring 43 before being bowled out. They scored at a steady pace, and ended up getting the victory with six wickets to spare and five balls left to play. At Cyril Fox Reserve, a half century from Henry Dolphin helped Crib Point score the win over Hastings. The Magpies scored 177. Hastings couldn’t get close in their run chase, and ended up all out for 100. Delacombe Park smashed the Seaford Tigers by eight wickets on Saturday.

CARRUM Downs grabbed a narrow two wicket win over Rye on Saturday. Opener Jordan Blades got things started well for Rye, scoring 64 runs before losing his wicket. His side end-

ed up being bowled out for 162. Carrum Downs put on a good team performance, with most of their batsmen making contributions. They ended up reaching their target with an over to spare and just two wickets in hand. It was a good day for Tyabb on Saturday. They had to work hard, but they managed to get the better of Ballam Park. Ballam Park chose to bat first and set the Yabbies a total of 172 to chase down. Tyabb opener Nick Taranto scored 48 before retiring. Paul Nelson was also impressive, scoring 55. The Yabbies ended up securing the win with two overs left to play. Skye weren’t able to get a win on their home deck, falling to Balnarring. The home side set a target of just 113, which their opponents chased down with ease. At Kananook Reserve, Seaford were smashed by the Stonecats. Frankston YCW chased down a target of 67 with eight wickets in hand. Stuart Plunkett

did most of the damage to Seaford, posting figures of 4/13.

MORNINGTON have fallen agonisingly short of a win against Flinders. BA Cairns played host to the two sides on Saturday. Both teams showed up in the mood to put big totals on the board. Flinders were sent in to bat first and played excellent cricket, finishing at 3/219. Three Flinders batsmen scored their half centuries, with Shane Beggs, Kane Hawkins, and Matthew Gale each reaching the milestone. Needing 220 to win Mornington were faced with a huge mountain to climb. They nearly got over the line thanks to opener Zac Garnet, who put together a massive innings of 126 not out. The knock was his biggest ever for his club. Garnet didn’t get much support from his teammates though, and Mornington ended up running out of time. They

were just four runs short of the win when their innings expired. Baxter also had a tough day on Saturday, as they fell just short of victory in their matchup against Baden Powell. Choosing to bat first, Baden Powell put 158 runs on the board. Baxter managed to keep touch with them in their run chase, but ended up being bowled out just eight runs short of their target. Daniel Di Paolo was the hero in the final over, taking the last wicket needed to wrap up the win. At Emil Madsen Reserve, Peninsula OB managed to defend their total of 133 against Mount Eliza. The Redlegs started well, and looked in the box seat at 2/78. They suffered a late collapse though, and ended up all out for 118. At Lloyd Park, Sorrento recovered from a bad start to defeat Langwarrin. The Sharks scored just 107, but managed to bowl out the Kangaroos for just 61.