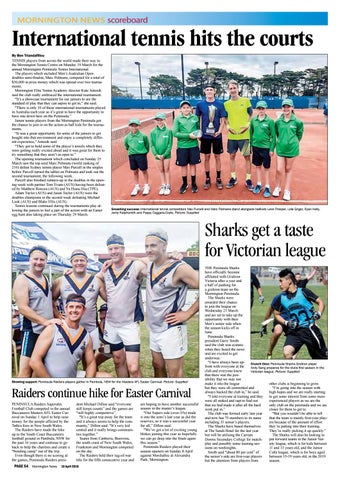 International tennis hits the courts By Ben Triandafillou TENNIS players from across the world made their way to the Mornington Tennis Centre on Monday 19 March for the annual Mornington Peninsula Tennis International. The players which included Men’s Australian Open doubles semi-finalist, Marc Polmans, competed for a total of $50,000 in prize money which was spread over two tournaments. Mornington Elite Tennis Academy director Kate Antosik said the club really embraced the international tournament. “It’s a showcase tournament for our juniors to see the standard of play that they can aspire to get to,” she said. “There is only 10 of these international tournaments played in Australia each year so it’s great to have the opportunity to have one down here on the Peninsula.” Junior tennis players from the Mornington Peninsula got the chance to join in on the action as ball kids for the tournaments. “It was a great opportunity for some of the juniors to get bought into that environment and enjoy a completely different experience,” Antosik said. “They got to hold some of the player’s towels which they were getting really excited about and it was great for them to try something that they aren’t as open to.” The opening tournament which concluded on Sunday 25 March saw the top seed Marc Polmans (world ranking of 216) defeat Sydney tennis player Max Purcell in the singles before Purcell turned the tables on Polmans and took out the second tournament, the following week. Purcell also finished runners-up in the doubles in the opening week with partner Tom Evans (AUS) having been defeated by Matthew Romios (AUS) and Yu Hsiou Hsu (TPE). Adam Taylor (AUS) and Jason Taylor (AUS) were the doubles champions in the second week defeating Michael Look (AUS) and Blake Ellis (AUS). Tennis lessons continued during the tournaments play allowing the juniors to feel a part of the action with an Easter egg hunt also taking place on Thursday 29 March.

Sharks get a taste for Victorian league

Raiders continue hike for Easter Carnival PENINSULA Raiders Superules Football Club competed in the annual Buccaneers Masters AFL Easter Carnival on Sunday 1 April to help raise money for the people affected by the Tathra fires in New South Wales. The Raiders have made the hike up to the South Coast Buccaneers football ground in Pambula, NSW for the past 16 years and continue to go back to help the charities and create a “bonding camp” out of the trip. Even though there is no scoring at the games, Peninsula Raiders presi-

dent Michael Dillon said “everyone still keeps counts” and the games are “still highly competitive”. “It’s a great trip away for the team and it always seems to help the community,” Dillon said. “It’s very kid central and it really brings communities together.” Teams from Canberra, Boorowa, the south coast of New South Wales, Frankston and Mornington competed on the day. The Raiders held their tug-of-war title for the fifth consecutive year and

are hoping to have another successful season in the master’s league. “Our Supers side (over-35s) made it into the semi’s last year as did the reserves, so it was a successful year for all,” Dillon said. “We’ve got a lot of exciting young blokes joining this year so hopefully we can go deep into the finals again this season.” Peninsula Raiders played their season openers on Sunday 8 April against Mordialloc at Alexandra Park, Mornington.

THE Peninsula Sharks have officially become affiliated with Gridiron Victoria after a year and a half of pushing for a gridiron team on the Mornington Peninsula. The Sharks were awarded their chance to join the league on Wednesday 21 March and are set to take up the opportunity with their Men’s senior side when the season kicks off in June. Peninsula Sharks president Garry Smith said the club was ecstatic when they heard the news and are excited to get underway. “I have always been upCrunch time: Peninsula Sharks Gridiron player front with everyone at the Andy Sang prepares for the clubs first season in the club and everyone knew Victorian league. Picture: Supplied that there was the possibility that we may not other clubs is beginning to grow. make it into the league “I’m going into the season with but they were all committed and high hopes and we are really starting always backed the club in,” he said. to get some interest from some more “I told everyone at training and they experienced players as we are the were all stoked and rapt to find out only club on the peninsula and we are that we had made it after all the hard closer for them to get to. work put in.” “But you wouldn’t be able to tell The club was formed early last year that the team is mainly first-year playand now has 75 members to its name ers because of the amount of effort including 35 senior’s players. they’re putting into their training. The Sharks have based themselves They’re really picking it up quickly.” at The Sands Hotel for the last year The Sharks will also be looking to but will be utilising the Carrum put forward teams in the Junior VarDowns Secondary College for matchsity league, which is for kids between play and possibly some training ses11 and 15 years old, and the Junior sions on weeknights. Colts league, which is for boys aged Smith said “about 80 per cent” of between 15-19 years old, in the 2019 the senior’s side are first-year players season. but the attention from players from