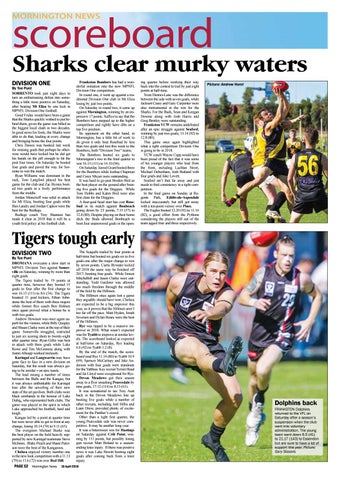 By Toe Punt SORRENTO took just eight days to turn an embarrassing defeat into something a little more positive on Saturday, after beating Mt Eliza by one kick in MPNFL Division One football. Good Friday would have been a game that the Sharks quickly wished to put behind them, given the game was billed as the biggest local clash in two decades. In good news for footy, the Sharks were able to do that, leading at every change and bringing home the four points. Chris Dawes was hooked last week for missing goals that perhaps he otherwise would have kicked but he did get his hands on the pill enough to hit the post four times. On Saturday he booted four goals and paved the way for Sorrento to win the match. Ryan Williams was dominant in the ruck, Tom Langford played his best game for the club and Zac Byrnes booted two goals in a lively performance from the middle. Jordan Moncrieff was solid in attack for Mt Eliza, booting four goals while Ben Landry and Jordan Capkin were the best for the Redlegs. Redlegs coach Troy Shannon has made it clear in 2018 that it will be a youth first policy at his football club.

Frankston Bombers has had a wonderful initiation into the new MPNFL Division One competition. In round one, it went up against a traditional Division One club in Mt Eliza losing by just two points. On Saturday in round two, it came up against Mornington, winning by an impressive 17 points. Suffice to say that the Bombers have stepped up to the higher competition and rightly have dibs on a top five position. Its opponent on the other hand, in Mornington, has a little bit of work to do given it only beat Rosebud by less than two goals and lost this week to the Bombers, both “Division Two” teams. The Bombers booted six goals to Mornington’s two in the final quarter to win 16.15 (111) to 14.10 (94). On Saturday Jarrod Grant booted three for the Bombers while Joshua Chapman and Corey Micari were outstanding. It was hard to go past Broden Bird as the best player on the ground after booting five goals for the Doggies. While Tom Hobbs and Kalen Bird were also first class for the Doggies. A four-goal head start has cost Rosebud in its match against Bonbeach going down by 23 points, 7.15 (57) to 12.8 (80). Despite playing on their home deck the Buds allowed Bonbeach to boot four unanswered goals in the open-

ing quarter before working their way back into the contest to trail by just eight points at half-time. Trent Dennis-Lane was the difference between the side with seven goals, while Jackson Casey and Gary Carpenter were also instrumental in the win for the Sharks. For the Buds, Sean and Keegan Downie along with Josh Harris and Greg Bentley were outstanding. Frankston YCW remains undefeated after an epic struggle against Seaford, winning by just two goals, 13.14 (92) to 12.8 (80). This game once again highlighted what a tight competition Division One is going to be in 2018. YCW coach Wayne Capp would have been proud of the fact that it was some of his younger players who lead from the front, including Lachlan Street, Michael Debenham, Josh Butland with four goals and Jake Lovett. Seaford isn’t that far away and just needs to find consistency in a tight competition. In the final game on Sunday at Regents Park, Edithvale-Aspendale kicked inaccurately but still got away with a ten-point victory over Pines. The Eagles booted 12.20 (92) to 11.16 (82), a good effort from the Pythons considering the players still out of the team.agged four and three respectively .

By Toe Punt DROMANA overcame a slow start in MPNFL Division Two against Somerville on Saturday, winning by more than eight goals. The Tigers trailed by 19 points at quarter time, however they booted 15 goals to four after the first change to win 16.15 (111) to 8.6 (54). The Tigers boasted 11 goal kickers, Ethan Johnstone the best of them with three majors while former Rye coach Ben Holmes once again proved what a bonus he is with two goals. Andrew Howison was once again superb for the visitors, while Billy Quigley and Shaun Clarke were at the top of their game. Somerville struggled, restricted to just six scoring shots to twenty-eight after quarter time. Ryan Gillis was best in attack with three goals while Luke Rowe and Tim McGenniss along with Justin Allsopp worked tirelessly. Karingal and Langwarrin may have gone face to face in a new division on Saturday, but the result was always going to be similar – an epic tussle. The lead swung a number of times between the Bulls and the Kangas, but it was always unthinkable for Karingal lose after the unveiling of their new state of the art pavilion. Both clubs wore black armbands in the honour of Luke Duhig, who represented both clubs. The game was played in the spirit in which Luke approached his football, hard and tough. Kangas led by a point at quarter time but were never able to get in front at any change, losing 10.14 (74) to 9.11 (65). The evergreen Michael Burke was the best player on the field heavily supported by new Karingal teammate Steve McInnes. Blake Peach and Shane Paterson were the best of the Kangaroos. Chelsea enjoyed victory number one in the new look competition with a 11.13 (79) to 11.6 (72) win over Red Hill.

The Seagulls trailed by four points at half-time but booted six goals six to five goals one after the major change to win by seven points. Curtis Bywater kicked off 2018 the same way he finished off 2017, booting four goals. While Simon Mitchelhill and Jason Clarke were outstanding. Todd Gardiner was allowed too much freedom through the middle of the field by the Hillmen. The Hillmen once again lost a game they arguably should have won. Chelsea are expected to be a big improver this year, so it proves that the Hillmen aren’t too far off the pace. Matt Hyden, Jonah Siversen and Dylan Hoare were the best of the Hillmen. Rye was tipped to be a massive improver in 2018. What wasn’t expected was for Tyabb to improve at similar levels. The scoreboard looked as expected at half-time on Saturday, Rye leading 6.6 (42) to Tyabb 1.2 (8). By the end of the match, the scoreboard read Rye 11.14 (80) to Tyabb 10.9 (69). Spencer McCartney and Jake Anderson with four goals were standouts for the Yabbies. Key recruit Tyrren Head and Jai Lloyd were exceptional for Rye. Devon Meadows got their season away to a flyer smashing Pearcedale by nine goals, 17.12 (114) to 8.13 (61). It was sensational to see Troy Aust back in the Devon Meadows line up booting five goals while a number of other recruits, including Joel Hillis and Liam Drew, provided plenty of excitement for the Panther’s crowd. Other than a tight first quarter, the young Pearcedale side was never competitive. It may be another long year. It was a bittersweet win for Hastings on Saturday against Crib Point, winning by 111 points, but possibly losing gun recruit Matt Boland to a seasonending knee injury. If there was positive news it was Luke Hewitt booting eight goals after coming back from a knee injury.

FRANKSTON Dolphins returned to the VFL on Saturday after a season’s suspension when the club went into voluntary administration. The young team went down 6.5 (41) to 21.17 (143) to Essendon but are sure to have a lot of support this year. Picture: Gary Sissons