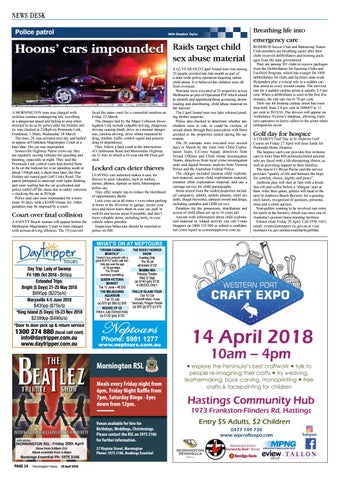 Court over fatal collision A SAFETY Beach woman will appear before the Melbourne Magistrates’ Court in June charged with serious driving offences. The 19-year-old

faced the same court for a committal mention on Friday 23 March. The charges laid by the Major Collision Investigation Unit include culpable driving, dangerous driving causing death, drive in a manner dangerous, careless driving, drive whilst impaired by drug, disobey traffic control signal and possess drug of dependence. They follow a fatal crash at the intersection of Cranbourne Road and Moorooduc Highway on 13 July in which a 16-year-old Mt Eliza girl died.

Locked cars deter thieves LEAVING cars unlocked makes it easy for thieves to steal valuables, such as wallets, purses, phones, laptops or tools, Mornington police say. They offer simple tips to reduce the likelihood of opportunistic thefts: Lock your car at all times – even when parking at home in the driveway or garage, secure your keys and never leave them in your car, park in well-lit and secure areas if possible, and don’t leave valuable items, including tools, in your vehicle where possible. Suspicious behaviour should be reported to police on 000.

Breathing life into emergency care ROSEBUD Soccer Club and Balnarring Tennis Club members are breathing easier after their clubs received defibrillators and training packages from the state government. They are among 301 clubs to receive packages from the Defibrillators for Sporting Clubs and Facilities Program, which has a target for 1000 defibrillators for clubs and facilities state-wide. Bystanders play a critical role in a sudden cardiac arrest as every second counts. The survival rate for a sudden cardiac arrest is usually 2-5 per cent. When a defibrillator is used in the first few minutes, the rate can rise to 70 per cent. Their use for treating cardiac arrest has risen four-fold: from 2.8 per cent in 2006/07 to 11 per cent in 2015/16. The devices will appear on Ambulance Victoria’s database, allowing triple zero operators to direct callers to the scene when emergencies occur.

A CHARITY Golf Day at St Andrews Golf Course on Friday 27 April will raise funds for Peninsula Home Hospice. The hospice each year provides free in-home care to more than 800 peninsula-based patients who are faced with a life-threatening illness, as well as providing support to their families. The mayor Cr Bryan Payne said the service provides “quality of life and honours the hope for comfort, choice, dignity and peace”. Ambrose play will start at 7am with a breakfast roll and coffee before a ‘shotgun’ start at 8am. After their game, golfers will head to the new St Andrews Beach Brewery for a grazingstyle lunch, recognition of sponsors, presentations and a silent auction. Non-golfers wanting to be involved can come for lunch at the brewery which was once one of Australia’s premier horse-training facilities. Entries close Friday 20 April. Call 5950 1443, email: events@mornpen.vic.gov.au or visit: mornpen.vic.gov.au/mayoralcharitygolfday