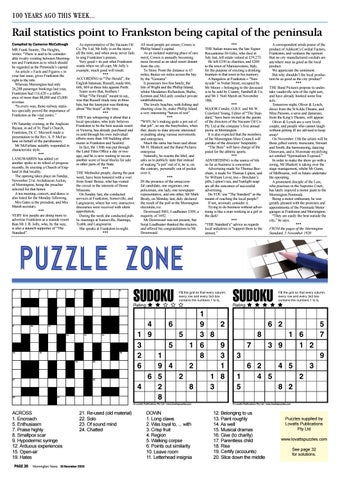 Rail statistics point to Frankston being capital of the peninsula As representative of the Vacuum Oil Co. Pty Ltd, Mr Jolly is on the move all the time, and when away never fails to sing Frankston’s praises. Very good – its just what Frankston wants when we all copy Mr Jolly’s example, much good will result. *** ACCORDING to “The Herald”, the English batsman, Russell, made 666, 666, 669 in three hits against Perth. Some score that, brothers ! What “The Herald” meant to say, was that Russell made nine in three hits, but the linotypist was thinking about “the beast” at the time. *** THEY are whispering it about that a local speculator, who truly believes Frankston to be the best seaside resort in Victoria, has already purchased and re-sold through his own individual efforts more than 100 building allotments in Frankston and Seaford. In fact, the 130th was put through the Land Titles Office a day or two ago, and he is now waiting to secure another score of local blocks for sale in other parts of the State. *** THE Methodist people, during the past week, have been honored with a visit from Sister Bessie, who has visited the circuit in the interests of Home Missions. On Sunday last, she conducted services at Frankston, Somerville, and Langwarrin, where her very instructive discourses were received with silent approbation. During the week she conducted public meetings at Somerville, Hastings, Tyabb, and Langwarrin. She speaks at Frankston to-night. ***

Compiled by Cameron McCullough MR Frank Stonite, The Heights, writes: “There is said to be considerable rivalry existing between Mornington and Frankston as to which should be regarded as the Peninsula’s capital. An article – Facts and Figures – in your last issue, gives Frankston the right to the title. Whereas Mornington had only 26,288 passenger bookings last year, Frankston had 114,420 – a difference of more than 88,000 and £3,000 revenue. “In every way, those railway statistics specially proved the importance of Frankston as the vital centre.” *** ON Saturday evening, at the Anglican Bazaar, in aid of St. Paul’s Church, Frankston, Dr. C. Maxwell made a presentation to the Rev. A. P. McFarlane on behalf of the parishioners. Mr McFarlane suitably responded in characteristic style. *** LANGWARRIN has added yet another spoke to its wheel of progress recently, by erecting a Church of England in that locality. The opening takes place on Sunday, November 21st. Archdeacon Aickin, of Mornington, being the preacher selected for that honor. A tea meeting, concert, and dance is also listed for the Monday following. Mrs Gates is the president, and Mrs Marsh secretary. *** VERY few people are doing more to advertise Frankston as a seaside resort than Mr J. B. Jolly, who, by the way, is also a staunch supporter of “The Standard”.

AS most people are aware, Cowes is Phillip Island’s capital. As an isolated watering place of rare merit, Cowes is annually becoming more favored as an ideal resort distant from the city. To Stony Point the distance is 45 miles, thence six miles across the bay by the “Genistra”. It possesses two fine hotels, the Isle of Wight and the Phillip Island, whilst Mesdames Richardson, Burke, Kennon and McLardy conduct private establishments. The lovely beaches, with fishing and shooting close by, make Phillip Island a very interesting “haven of rest”. *** “WHY, he’s making quite a pot out of that job”, so say the busybodies, when they desire to slate anyone interested in pushing along various movements and enterprises. Much the same has been said about Mr H. Blaskett and the Band Pictures enterprise. Naturally, he resents the libel, and asks us to publicly state that instead of making “a pot” out of it, he is, on the contrary, personally out of pocket over it. *** IN the presence of the unsuccessful candidate, one organiser, one policeman, one lady, one newspaper representative, and one other, Mr Mark Brody, on Monday last, duly declared the result of the poll in the Mornington electorate,viz: Downward 5001, Leadbeater 3309, a majority of 1692. Mr Downward was not present, but Sergt Leadbeater thanked the electors, and offered his congratulations to Mr Downward.

*** THE Italian musician, the late Signor Roccantonio Di Gilio, who died in July last, left estate valued at £59,273. He left £350 to charities, and £200 to the town of Marsieovetore, Italy, for the purpose of erecting a drinking fountain in that town to his memory. A bungalow at Frankston – “Sunnyside” in Nolan Street, occupied by Mr Moore – belonging to the deceased is to be sold by Cranny, Sambell &amp; Co. and Mr J. Nott Marsh on November 18th. *** MAJOR Conder, O.B.E. and Mr W. Crawford Young, Editor of “The Standard,” have been invited as the guests of the directors of the Vacuum Oil Co. Pty Ltd at the company’s first annual picnic at Mornington. It is also expected that the members of the Mornington Shire Council will partake of the directors’ hospitality. “The Boss” will have charge of the pistol for the athletic sports. *** ADVERTISING is the source of life so far as business is concerned. Advertising made Sir Thomas Beecham, it made Sir Thomas Lipton, and Sir William Lever, too – Beecham’s pills, Lipton’s tea, and Sunlight soap are all the outcomes of successful advertising. Do YOU use “The Standard” as the means of reaching the local people? If not, seriously consider it. Trying to do business without advertising is like a man winking at a girl in the dark! *** “THE Standard’s” advice as regards local industries is “support them to the utmost.”

A correspondent sends praise of the product of Addicott’s Cordial Factory, Frankston, and ventures the opinion that no city manufactured cordials are anywhere near as good as the local product. We appreciate the sentiment. But why shouldn’t the local production be as good as the city product? *** THE Band Pictures propose to undertake vaudeville acts of the right sort, and have already booked some fine acts. Tomorrow night, Oliver &amp; Lynch, direct from the St Kilda Theatre, and Miss Parsons, a serio and danseuse, from the King’s Theatre, will appear. Oliver &amp; Lynch are a very lively couple, and people who cannot laugh without getting ill are advised to keep away! On November 13th the artists will be those gifted variety musicians, Stewart and Smith, the harmonising, dancing Donovans, and a 30-minute mystifying act entitled “Spiritualism Exposed.” In order to make the show go with a swing, Mr Blaskett is taking over the stage management, whilst Mr Gunn, of Melbourne, will in future undertake the operating. A prominent disciple of the Law, who practises in the Supreme Court, has lately enjoyed a motor jaunt to the Mornington Peninsula. Being a motor enthusiast, he was greatly pleased with the premises and appointments of the Peninsula Motor garages at Frankston and Mornington. “They are easily the best outside the city,” he says. *** FROM the pages of the Mornington Standard, 5 November 1920