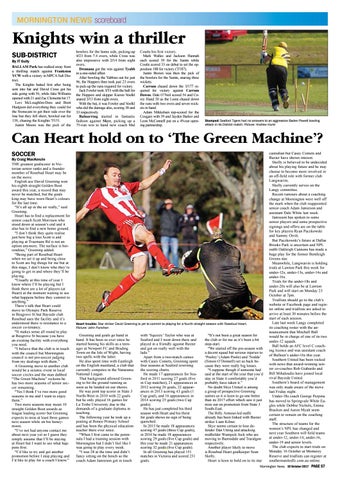 By IT Gully BALLAM Park has walked away from a thrilling match against Frankston YCW with a victory in MPCA Sub District. The Knights batted first after being sent into bat and David Cross got his side going with 56, while Jake Williams opened with 21 and Zac Clements hit 17. Levi McLoughlin-Dore and Brett Hudgson did everything they could for the Stonecats to get their side over the line but they fell short, bowled out for 139, chasing the Knights 7/151. Justin Moore was the pick of the

bowlers for the home side, picking-up 4/23 from 7.4 overs, while Cross was also impressive with 2/14 from eight overs. Dromana got the win against Tyabb in a one-sided affair. After bowling the Yabbies out for just 96, the Hoppers then took just 23 overs to pick-up the runs required for victory. Jack Fowler took 3/33 with the ball for the Hoppers and skipper Kieren Voelkl snared 3/15 from eight overs. With the bat, it was Fowler and Voelkl who did the damage also, scoring 38 and 33 respectively. Balnarring started in fantastic fashion against Skye, picking up a 75-run win to hand new coach Mal

Coutts his first victory. Mark Walles and Jackson Hannah each scored 39 for the Saints while Coutts scored 33 on debut to set the opposition 188 for victory (7/187). Justin Brown was then the pick of the bowlers for the Saints, snaring three wickets. Carrum chased down the 5/177 required for victory against Carrum Downs. Dale O’Neil scored 54 and Corey Hand 50 as the Lions chased down the runs with two overs and seven wickets in hand. Adam Mikkelsen top-scored for the Cougars with 39 and Jayden Barker and Leon McConnell put on a 49-run opening partnership.

Stumped: Seaford Tigers had no answers to an aggressive Baden Powell bowling attack in its District match. Picture: Andrew Hurst

Can Heart hold on to ‘The Green Machine’? SOCCER

By Craig MacKenzie THE greatest goalscorer in Victorian senior ranks and a founder member of Rosebud Heart may be on the move. English ace David Greening won his eighth straight Golden Boot award this year, a record that may never be matched, but the goals king may have worn Heart’s colours for the last time. “It’s all up in the air really,” said Greening. Heart has to find a replacement for senior coach Scott Morrison who stood down at season’s end and it also has to find a new home ground. “I don’t think they quite realise just how big a loss Scott is and playing at Truemans Rd is not an option anymore. The surface is horrendous,” Greening added. “Being part of Rosebud Heart when we set it up and being close to Scott are big things for me but at this stage, I don’t know who they’re going to get in and where they’ll be playing. “Usually at this time of year I know where I’ll be playing but I think there are a lot of players (at Heart) at the moment waiting to see what happens before they commit to anything.” There’s talk that Heart could move to Olympic Park Reserve in Besgrove St but Bayside club Rosebud uses the facility and it’s understood there is resistance to a soccer co-tenancy. “It makes sense all round to play at Besgrove St because you have an existing facility with everything you need. “I believe that the club is in touch with the council but Mornington council is not pro-soccer judging from my dealings with them.” A Greening move to another club would be a seismic event in local soccer circles and the man dubbed “The Green Machine” reckons he has two more seasons of senior soccer remaining. “Yes I think I’ve two more good seasons in me and I want to enjoy them.” Two more seasons may mean 10 straight Golden Boot awards as league leading scorer but Greening expects to miss at least three games next season while on his honeymoon. “I’ve not had anyone contact me about next year yet so I guess they simply assume that I’ll be staying at Heart but I want to see what happens first. “I’d like to try and get another promotion before I stop playing and I’d like to play for a coach I know.”

Heart trouble: Star striker David Greening is yet to commit to playing for a fourth straight season with Rosebud Heart. Picture: John Punshon

Greening and goals go hand in hand. It has been so ever since he started honing his skills as a teenager at Newport FC and Brading Town on the Isle of Wight, having two spells with the latter. He also spent time with Eastleigh on the English mainland, a club that currently competes in the Vanarama National League. That background allowed Greening to hit the ground running as soon as he landed on our shores. He was joint top scorer in State 3 North-West in 2010 with 22 goals but he only played 16 games for La Trobe University due to the demands of a graduate diploma in teaching. The following year he took up a posting at Boneo Primary School and has been the physical education teacher there ever since. “When I first came to the peninsula I had a training session with Mornington but I didn’t feel like I was going to play every week. “I was 28 at the time and didn’t fancy sitting on the bench so the coach Adam Jamieson got in touch

“It’s not been a great season for the club or for me as it’s been a bit stop-start. “We started off the pre-season with a decent squad but serious injuries to ‘Pooley’ (Adam Poole) and ‘Sodda’ (Simon O’Donnell) set us back because they were really big losses. “I suppose though if someone had said at the start of the year that you’d stay in State 4 comfortably you’d probably have taken it.” No doubt Skye United is among a group of prospective Greening suitors as it is keen to go one better than its 2017 effort which saw it just miss out on promotion from State 3 South-East. The Billy Armour-led outfit already has been linked with Baxter striker Liam Kilner. Skye seems certain to lose defender Dan Utting and attacking midfielder Wumjock Jock who are moving to Bairnsdale and Traralgon respectively. Another player likely to move is Rosebud Heart goalkeeper Sean Skelly. Heart is keen to hold on to its star

custodian but Casey Comets and Baxter have shown interest. Skelly is believed to be undecided about his playing future and he may choose to become more involved in an off-field role with former club Langwarrin. Skelly currently serves on the Langy committee. Recent rumours about a coaching change at Mornington were well off the mark when the club reappointed senior coach Adam Jamieson and assistant Dale White last week. Jamieson has spoken to some senior players and some prospective signings and offers are on the table for key players Ryan Paczkowski and Sammy Orritt. But Paczkowski’s future at Dallas Brooks Park is uncertain and NPL outfit Oakleigh Cannons has made a huge play for the former Bentleigh Greens star. Meanwhile, Langwarrin is holding trials at Lawton Park this week for under-12s, under-13s, under-14s and under-16s. Trials for the under-18s and under-20s will also be at Lawton Park and will start on Monday 23 October at 7pm. Triallists should go to the club’s website or Facebook page and register online and triallists are asked to arrive at least 30 minutes before the start of each session. Late last week Langy completed its coaching roster with the announcement that Mitchell Ball would be in charge of one of its two under-12 squads. Ball holds an AFC level C coaching licence and was assistant coach of Bulleen’s under-16s this year. Southern United has been rocked with news that award-winning senior co-coaches Rob Giabardo and Bill Mihaloudis have joined local rival Bayside United. Southern’s board of management was only made aware of the move last Friday night. Under-18s coach George Perpina has moved to Springvale White Eagles while Debbie Nichols, Emma Bracken and Aaron Myatt seem certain to remain on the coaching staff. The structure of teams for the women’s NPL has changed and next year Southern will field teams at under-12, under-14, under-16, under-19 and senior levels. The club expects to start trials on Monday 16 October at Monterey Reserve and triallists can register at southernunitedfc.com.au online.