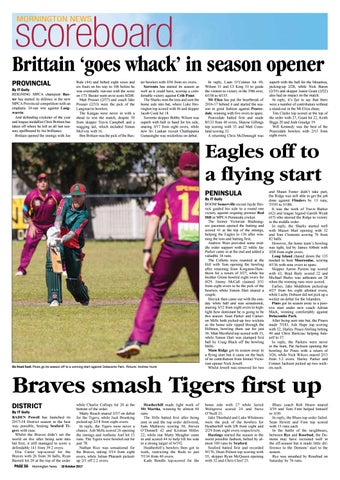 By IT Gully REIGNING MPCA champion Baxter has started its defence in the new MPCA Provincial competition with an emphatic 34-run win against Langwarrin. And defending cricketer of the year and league medallist Chris Brittain has taken off where he left us all last season, spellbound by his brilliance. Brittain opened the innings with Joe

Rule (44) and belted eight sixes and six fours on his way to 106 before he was eventually run-out with the score on 173. Baxter went on to score 8/200. Matt Prosser (2/37) and coach Jake Prosser (2/33) were the pick of the Langwarrin bowlers. The Kangas were never in with a shout to win the match, despite 50 from skipper Travis Campbell and a wagging tail, which included Simon McEvoy with 16. Ben Brittain was the pick of the Bax-

ter bowlers with 3/36 from six overs. Sorrento has started its season as well as it could have, scoring a comfortable victory against Crib Point. The Sharks won the toss and sent the home side into bat, where Luke Herrington top scored with 46 and skipper Jacob Cook hit 18. Sorrento skipper Bobby Wilson was superb with ball in hand for his side, snaring 3/17 from eight overs, while new Sri Lankan recruit Chathupama Gunasinghe was wicketless on debut.

In reply, Liam O’Connor hit 49, Wilson 31 and CJ King 33 to guide the visitors to victory in the 39th over, 6/158 to 6/155. Mt Eliza has put the heartbreak of 2016-17 behind it and started the season in great fashion against Pearcedale, winning with five overs to spare. Pearcedale batted first and made 8/133 from 40 overs, Shayne Gillings top scoring with 35 and Matt Cousland scoring 33. A returning Chris McDonough was

superb with the ball for the Mounties, picking-up 2/28, while Nick Baron (2/35) and skipper Justin Grant (2/22) also had an impact on the match. In reply, it’s fair to say that there were a number of contributors without a stand-out in the Mt Eliza chase. Tim Clarke top scored at the top of the order with 27, Grant hit 22, Keith Biggs 20 and Josh Goudge 19. Will Kennedy was the best of the Pearcedale bowlers with 2/15 from eight overs.

Eagles off to a flying start PENINSULA

On front foot: Pines go its season off to a winning start against Delacome Park. Picture: Andrew Hurst

By IT Gully BOOM Somerville recruit Jayde Herrick guided his side to a round one victory against reigning premier Red Hill in MPCA Peninsula cricket. The former Victorian Bushrangers paceman opened the batting and scored 41 at the top of the innings, helping the Eagles to 156 after winning the toss and batting first. Andrew West provided some middle order support with 22 while Jay Parker came in at the end and added a valuable 18 runs. The Colletts were reunited at the Hill with Tom opening the bowling after returning from Kingston-Hawthorn for a return of 3/27, while his brother Glenn bowled eight overs for 0/29. Jimmy McCall claimed 3/11 from eight overs to be the pick of the bowlers while Simon Dart snared a couple. Herrick then came out with the oneday white ball and was sensational, snaring 3/12 from eight overs to highlight how dominant he is going to be this season. Sean Parker and Cameron Mills both picked-up two wickets as the home side ripped through the Hillmen, bowling them out for just 56. Matt Merifield top scored with 15, while Simon Dart was stumped first ball by Craig Black off the bowling Mills. Main Ridge got its season away to a flying start but it came on the back of no contribution from former Victorian opener Nick Jewell. Whilst Jewell was removed for two

and Shaun Foster didn’t take part, the Ridge was still able to get the job done against Flinders by 13 runs, 7/193 to 5/180. It was the work of Travis Barker (62) and league legend Gareth Wyatt (67) who steered the Ridge to victory in the middle order. In reply, the Sharks started well with Mason Mail opening with 32 and Tom Clements scoring 76 from 82 balls. However, the home team’s bowling was tight, led by James Abbott with 3/28 from eight overs. Long Island chased down the 135 needed to beat Moorooduc, scoring 4/136 with nine overs to spare. Skipper Aaron Paxton top scored with 43, Brad Baily scored 22 and Michael Burke was unbeaten on 28 when the winning runs were scored. Earlier, Jake Middleton picked-up 4/27 from his eight allotted overs, while Lachy Dobson did not pick up a wicket on debut for the Islanders. Pines got its season away to a positive start under new coach Adrian Mack, winning comfortably against Delacombe Park. After being sent into bat, the Piners made 7/183, Ash Hupe top scoring with 52, Harley Peace-Stirling hitting 40 and Chris Bartczac helping himself to 37. In reply, the Parkers were never in the hunt, Pat Jackson opening the bowling for Pines with a return of 3/26, while Nick Wilcox snared 2/13 from 5.2 overs. Harley Parker and Connor Jackson picked up two wickets each.

By IT Gully BADEN Powell has launched its 2017-18 District season in the best way possible, beating Seaford Tigers with ease. Whilst the Braves didn’t set the world on fire after being sent into bat first, it still managed to score a defendable 141 from 39.2 overs. Elia Carter top-scored for the Braves with 26 from 36 balls, Ryan Barnett hit 20 at the top of the order

while Charlie Collopy hit 20 at the bottom of the order. Matty Roach snared 2/37 on debut for the Tigers, while Jack Brooking picked-up 2/18 from eight overs. In reply, the Tigers were never a chance. Ash Mills scored 26 opening the innings and Anthony Joel hit 15 runs. The Tigers were bowled out for just 78. Nathan Rice was sensational for the Braves, taking 5/14 from eight overs, while Julian Pharaoh pickedup 2/1 off 2.2 overs.

Heatherhill made light work of Mt Martha, winning by almost 60 runs. The Hills batted first after being sent in and the top order delivered, Sam Mullavey scoring 50, Steven O’Donnell 42 and Kristian Miller 22, while star Matty Meagher came in and scored 44 to help lift his side to a strong target of 6/192. Heatherhill’s bowlers then got to work, restricting the Reds to just 7/134 from 40 overs. Kade Bendle top-scored for the

home side with 27 while Jarred Wolsgrove scored 24 and Steve O’Neill 21. Jake Theobald and Luke Whitmore were the pick of the bowlers for Heatherhill with 2/8 from eight and 2/29 from eight overs respectively. Hastings started the season in the worst possible fashion, belted by almost 100 runs by Seaford. Seaford batted first and recorded 9/176, Dean Polson top scoring with 55, skipper Ryan McQueen opening with 32 and Chris Cleef 25.

Blues coach Rob Hearn snared 3/39 and Tom Finn helped himself to 3/30. In reply, the Blues top order failed. Sean Hewitt and Finn top scored with 15 runs each. In the battle of the neighbours, between Rye and Rosebud, the Demons may have recruited well in the off-season but it made little difference to the Demons’ start to the season. Rye was smashed by Rosebud on Saturday by 76 runs.