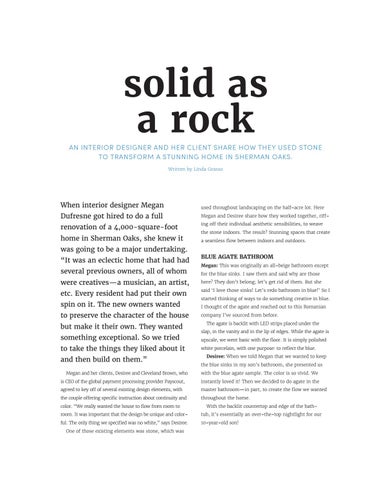 solid as a rock AN INTERIOR DESIGNER AND HER CLIENT SHARE HOW THEY USED STONE TO TRANSFORM A STUNNING HOME IN SHERMAN OAKS. Written by Linda Grasso

used throughout landscaping on the half-acre lot. Here

Dufresne got hired to do a full

Megan and Desiree share how they worked together, riff-

ing off their individual aesthetic sensibilities, to weave

home in Sherman Oaks, she knew it was going to be a major undertaking. “It was an eclectic home that had had several previous owners, all of whom

the stone indoors. The result? Stunning spaces that create a seamless flow between indoors and outdoors.

BLUE AGATE BATHROOM Megan: This was originally an all-beige bathroom except for the blue sinks. I saw them and said why are those

were creatives—a musician, an artist,

here? They don’t belong; let’s get rid of them. But she

etc. Every resident had put their own

said ‘I love those sinks! Let’s redo bathroom in blue!’ So I

spin on it. The new owners wanted to preserve the character of the house but make it their own. They wanted something exceptional. So we tried to take the things they liked about it and then build on them.” Megan and her clients, Desiree and Cleveland Brown, who

started thinking of ways to do something creative in blue. I thought of the agate and reached out to this Romanian company I’ve sourced from before. The agate is backlit with LED strips placed under the slap, in the vanity and in the lip of edges. While the agate is upscale, we went basic with the floor. It is simply polished white porcelain, with one purpose: to reflect the blue. Desiree: When we told Megan that we wanted to keep the blue sinks in my son’s bathroom, she presented us with the blue agate sample. The color is so vivid. We

is CEO of the global payment processing provider Payscout,

instantly loved it! Then we decided to do agate in the

agreed to key off of several existing design elements, with

master bathroom—in part, to create the flow we wanted

the couple offering specific instruction about continuity and

color. “We really wanted the house to flow from room to

With the backlit countertop and edge of the bath-

room. It was important that the design be unique and color-

tub, it’s essentially an over-the-top nightlight for our

ful. The only thing we specified was no white,” says Desiree.

One of those existing elements was stone, which was 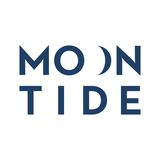