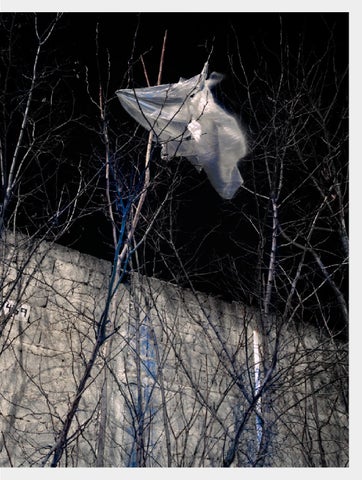 URBAN SECRET GARDEN why the night

«I like to make a photograph. In most of my pictures; I, pretty much, pick the same standpoint. I don’t give to myself more than one choices. Frontal to my subject. One to one. That’s it. A subtle sound. The mirror is up. Sometimes the duration of the exposure is 10’, or 15’ or even 20’. Rarely, exposure time is a fragment of a second. That’s my relationship with time. Time has to have duration. Time cannot be instantaneous. When time is long, a truth is revealed. Only then, when time is long and the aperture stays open, a picture is being produced. I receive the contact sheets from the lab; bright segments of time from my last excursion into the night. Foreground, middleground, background. Space well organized and some light. The flash adds more light into the picture with a snapping sound.» For a while, the time frame of the shooting, 4.30 a.m. - 7.00 a.m., had been of immense importance. By seeking the dawn-walk motifs throughout the city, I discovered freedom in the unconscious set of mind of the hours before the conscious light. I was there, where dark turned into light through a sharp noise; there, where morning bird chirpings met last night’s laughs; there, where the mesmerizing buzz of the automobiles drowned the sound of the flash light. Floral patterns joggling with ancient ruins, car lights in central avenues, construction sites with distant buildings at sleep, a kite, a plastic bag; all in an attempt to build a body of photos and recreate a secret garden. Lia Nalbantidou Thessaloniki, April 2013