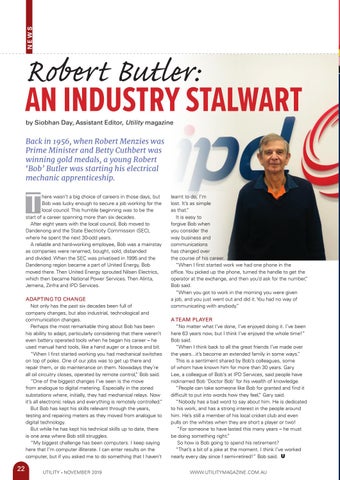 Back in 1956, when Robert Menzies was Prime Minister and Betty Cuthbert was winning gold medals, a young Robert ‘Bob’ Butler was starting his electrical mechanic apprenticeship.

here wasn’t a big choice of careers in those days, but Bob was lucky enough to secure a job working for the local council. This humble beginning was to be the start of a career spanning more than six decades. After eight years with the local council, Bob moved to Dandenong and the State Electricity Commission (SEC), where he spent the next 30-odd years. A reliable and hard-working employee, Bob was a mainstay as companies were renamed, bought, sold, disbanded and divided. When the SEC was privatised in 1995 and the Dandenong region became a part of United Energy, Bob moved there. Then United Energy sprouted Nilsen Electrics, which then became National Power Services. Then Alinta, Jemena, Zinfra and IPD Services.

ADAPTING TO CHANGE Not only has the past six decades been full of company changes, but also industrial, technological and communication changes. Perhaps the most remarkable thing about Bob has been his ability to adapt, particularly considering that there weren’t even battery operated tools when he began his career – he used manual hand tools, like a hand auger or a brace and bit. “When I first started working you had mechanical switches on top of poles. One of our jobs was to get up there and repair them, or do maintenance on them. Nowadays they’re all oil circuitry closes, operated by remote control,” Bob said. “One of the biggest changes I’ve seen is the move from analogue to digital metering. Especially in the zoned substations where, initially, they had mechanical relays. Now it’s all electronic relays and everything is remotely controlled.” But Bob has kept his skills relevant through the years, testing and repairing meters as they moved from analogue to digital technology. But while he has kept his technical skills up to date, there is one area where Bob still struggles. “My biggest challenge has been computers. I keep saying here that I’m computer illiterate. I can enter results on the computer, but if you asked me to do something that I haven’t

learnt to do, I’m lost. It’s as simple as that.” It is easy to forgive Bob when you consider the way business and communications has changed over the course of his career. “When I first started work we had one phone in the office. You picked up the phone, turned the handle to get the operator at the exchange, and then you’d ask for the number,” Bob said. “When you got to work in the morning you were given a job, and you just went out and did it. You had no way of communicating with anybody.”

A TEAM PLAYER “No matter what I’ve done, I’ve enjoyed doing it. I’ve been here 63 years now, but I think I’ve enjoyed the whole time!” Bob said. “When I think back to all the great friends I’ve made over the years...it’s become an extended family in some ways.” This is a sentiment shared by Bob’s colleagues, some of whom have known him for more than 30 years. Gary Lee, a colleague of Bob’s at IPD Services, said people have nicknamed Bob ‘Doctor Bob’ for his wealth of knowledge. “People can take someone like Bob for granted and find it difficult to put into words how they feel,” Gary said. “Nobody has a bad word to say about him. He is dedicated to his work, and has a strong interest in the people around him. He’s still a member of his local cricket club and even pulls on the whites when they are short a player or two! “For someone to have lasted this many years – he must be doing something right.” So how is Bob going to spend his retirement? “That’s a bit of a joke at the moment. I think I’ve worked nearly every day since I semi-retired!” Bob said. WWW.UTILITYMAGAZINE.COM.AU How utilities are investing in renewables; transformers and substations; leak detection; HDD; pipe and conduit; disaster management in Austr...

How utilities are investing in renewables; transformers and substations; leak detection; HDD; pipe and conduit; disaster management in Austr...