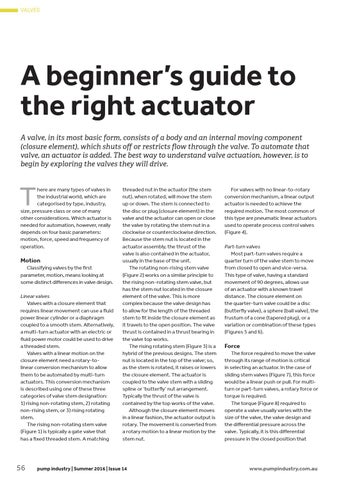 A beginnerâ&amp;#x20AC;&amp;#x2122;s guide to the right actuator A valve, in its most basic form, consists of a body and an internal moving component (closure element), which shuts off or restricts flow through the valve. To automate that valve, an actuator is added. The best way to understand valve actuation, however, is to begin by exploring the valves they will drive.

here are many types of valves in the industrial world, which are categorised by type, industry, size, pressure class or one of many other considerations. Which actuator is needed for automation, however, really depends on four basic parameters: motion, force, speed and frequency of operation.

Motion Classifying valves by the first parameter, motion, means looking at some distinct differences in valve design. Linear valves Valves with a closure element that requires linear movement can use a fluid power linear cylinder or a diaphragm coupled to a smooth stem. Alternatively, a multi-turn actuator with an electric or fluid power motor could be used to drive a threaded stem. Valves with a linear motion on the closure element need a rotary-tolinear conversion mechanism to allow them to be automated by multi-turn actuators. This conversion mechanism is described using one of these three categories of valve stem designation: 1) rising non-rotating stem, 2) rotating non-rising stem, or 3) rising rotating stem. The rising non-rotating stem valve (Figure 1) is typically a gate valve that has a fixed threaded stem. A matching

For valves with no linear-to-rotary conversion mechanism, a linear output actuator is needed to achieve the required motion. The most common of this type are pneumatic linear actuators used to operate process control valves (Figure 4). Part-turn valves Most part-turn valves require a quarter turn of the valve stem to move from closed to open and vice-versa. This type of valve, having a standard movement of 90 degrees, allows use of an actuator with a known travel distance. The closure element on the quarter-turn valve could be a disc (butterfly valve), a sphere (ball valve), the frustum of a cone (tapered plug), or a variation or combination of these types (Figures 5 and 6).

Force The force required to move the valve through its range of motion is critical in selecting an actuator. In the case of sliding stem valves (Figure 7), this force would be a linear push or pull. For multiturn or part-turn valves, a rotary force or torque is required. The torque (Figure 8) required to operate a valve usually varies with the size of the valve, the valve design and the differential pressure across the valve. Typically, it is this differential pressure in the closed position that

Pumping oil and gas, valves, State of the Industry and more.