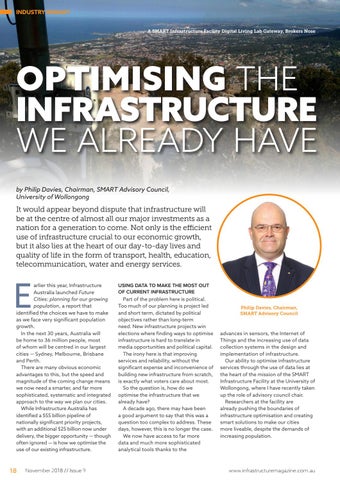 OPTIMISING THE INFRASTRUCTURE WE ALREADY HAVE by Philip Davies, Chairman, SMART Advisory Council, University of Wollongong

It would appear beyond dispute that infrastructure will be at the centre of almost all our major investments as a nation for a generation to come. Not only is the efficient use of infrastructure crucial to our economic growth, but it also lies at the heart of our day-to-day lives and quality of life in the form of transport, health, education, telecommunication, water and energy services.

arlier this year, Infrastructure Australia launched Future Cities: planning for our growing population, a report that identified the choices we have to make as we face very significant population growth. In the next 30 years, Australia will be home to 36 million people, most of whom will be centred in our largest cities — Sydney, Melbourne, Brisbane and Perth. There are many obvious economic advantages to this, but the speed and magnitude of the coming change means we now need a smarter, and far more sophisticated, systematic and integrated approach to the way we plan our cities. While Infrastructure Australia has identified a $55 billion pipeline of nationally significant priority projects, with an additional $25 billion now under delivery, the bigger opportunity — though often ignored — is how we optimise the use of our existing infrastructure.

USING DATA TO MAKE THE MOST OUT OF CURRENT INFRASTRUCTURE Part of the problem here is political. Too much of our planning is project led and short term, dictated by political objectives rather than long-term need. New infrastructure projects win elections where finding ways to optimise infrastructure is hard to translate in media opportunities and political capital. The irony here is that improving services and reliability, without the significant expense and inconvenience of building new infrastructure from scratch, is exactly what voters care about most. So the question is, how do we optimise the infrastructure that we already have? A decade ago, there may have been a good argument to say that this was a question too complex to address. These days, however, this is no longer the case. We now have access to far more data and much more sophisticated analytical tools thanks to the

advances in sensors, the Internet of Things and the increasing use of data collection systems in the design and implementation of infrastructure. Our ability to optimise infrastructure services through the use of data lies at the heart of the mission of the SMART Infrastructure Facility at the University of Wollongong, where I have recently taken up the role of advisory council chair. Researchers at the facility are already pushing the boundaries of infrastructure optimisation and creating smart solutions to make our cities more liveable, despite the demands of increasing population.