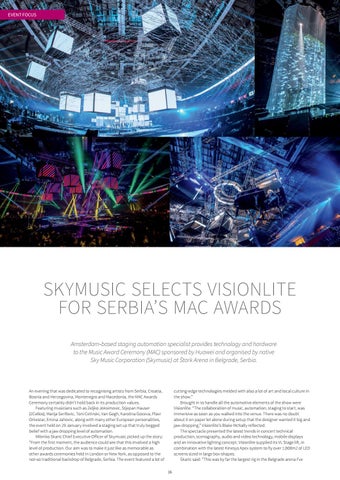 An evening that was dedicated to recognising artists from Serbia, Croatia, Bosnia and Herzegovina, Montenegro and Macedonia, the MAC Awards Ceremony certainly didn’t hold back in its production values. Featuring musicians such as Zeljko Joksimovic, Stjepan Hauser (2Cellos), Marija Serifovic, Toni Cetinski, Van Gogh, Karolina Goceva, Plavi Orkestar, Emina Jahovic, along with many other European personalities, the event held on 29 January involved a staging set up that truly begged belief with a jaw dropping level of automation. Milenko Skaric Chief Executive Officer of Skymusic picked up the story: “From the first moment, the audience could see that this involved a high level of production. Our aim was to make it just like as memorable as other awards ceremonies held in London or New York, as opposed to the not-so traditional backdrop of Belgrade, Serbia. The event featured a lot of

cutting-edge technologies melded with also a lot of art and local culture in the show.” Brought in to handle all the automotive elements of the show were Visionlite. “The collaboration of music, automation, staging to start, was immersive as soon as you walked into the venue. There was no doubt about it on paper let alone during setup that the designer wanted it big and jaw-dropping,” Visionlite’s Blake McNally reflected. The spectacle presented the latest trends in concert technical production, scenography, audio and video technology, mobile displays and an innovative lighting concept. Visionlite supplied its VL Stage lift, in combination with the latest Kinesys Apex system to fly over 1,000m2 of LED screens sized in large box-shapes. Skaric said: “This was by far the largest rig in the Belgrade arena I’ve 16