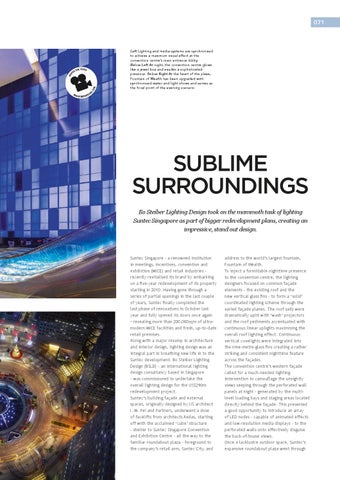 Left Lighting and media systems are synchronised to achieve a maximum visual effect at the convention centre’s main entrance lobby. Below Left At night, the convention centre glows like a jewel box and exudes a sophisticated presence. Below Right At the heart of the plaza, Fountain of Wealth has been upgraded with synchronised water and light shows and serves as the focal point of the evening scenario.

Suntec Singapore - a renowned institution in meetings, incentives, convention and exhibition (MICE) and retail industries – recently revitalised its brand by embarking on a five-year redevelopment of its property starting in 2010. Having gone through a series of partial openings in the last couple of years, Suntec finally completed the last phase of renovations in October last year and fully opened its doors once again - revealing more than 200,000sqm of ultramodern MICE facilities and fresh, up-to-date retail premises. Along with a major revamp in architecture and interior design, lighting design was an integral part in breathing new life in to the Suntec development. Bo Steiber Lighting Design (BSLD) - an international lighting design consultancy based in Singapore - was commissioned to undertake the overall lighting design for the US$290m redevelopment project. Suntec’s building façade and external spaces, originally designed by US architect I. M. Pei and Partners, underwent a dose of facelifts from architects Aedas, starting off with the acclaimed ‘cube’ structure - shelter to Suntec Singapore Convention and Exhibition Centre - all the way to the familiar roundabout plaza - foreground to the company’s retail arm, Suntec City, and

address to the world’s largest fountain, Fountain of Wealth. To inject a formidable nighttime presence to the convention centre, the lighting designers focused on common façade elements – the existing roof and the new vertical glass fins – to form a ‘solid’ coordinated lighting scheme through the varied façade planes. The roof sails were dramatically uplit with ‘wash’ projectors and the roof pediments accentuated with continuous linear uplights maximising the overall roof lighting effect. Continuous vertical covelights were integrated into the nine-metre glass fins creating a rather striking and consistent nighttime feature across the façades. The convention centre’s western façade called for a much-needed lighting intervention to camouflage the unsightly views seeping through the perforated wall panels at night - generated by the multilevel loading bays and staging areas located directly behind the façade. This presented a good opportunity to introduce an array of LED nodes - capable of animated effects and low-resolution media displays - to the perforated walls onto effectively disguise the back-of-house views. Once a lacklustre outdoor space, Suntec’s expansive roundabout plaza went through