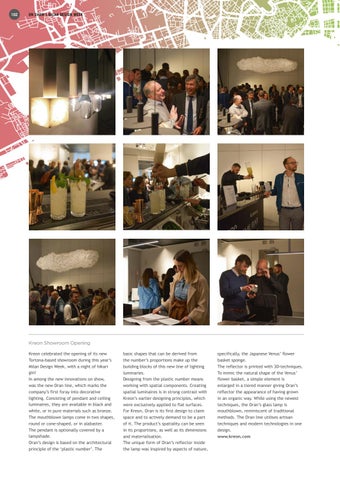 Kreon Showroom Opening Kreon celebrated the opening of its new Tortona-based showroom during this year’s Milan Design Week, with a night of hikari gin! In among the new innovations on show, was the new Oran line, which marks the company’s first foray into decorative lighting. Consisting of pendant and ceiling luminaires, they are available in black and white, or in pure materials such as bronze. The mouthblown lamps come in two shapes, round or cone-shaped, or in alabaster. The pendant is optionally covered by a lampshade. Oran’s design is based on the architectural principle of the ‘plastic number’. The

basic shapes that can be derived from the number’s proportions make up the building blocks of this new line of lighting luminaries. Designing from the plastic number means working with spatial components. Creating spatial luminaires is in strong contrast with Kreon’s earlier designing principles, which were exclusively applied to flat surfaces. For Kreon, Oran is its first design to claim space and to actively demand to be a part of it. The product’s spatiality can be seen in its proportions, as well as its dimensions and materialisation. The unique form of Oran’s reflector inside the lamp was inspired by aspects of nature,

specifically, the Japanese Venus’ flower basket sponge. The reflector is printed with 3D-techniques. To mimic the natural shape of the Venus’ flower basket, a simple element is enlarged in a tiered manner giving Oran’s reflector the appearance of having grown in an organic way. While using the newest techniques, the Oran’s glass lamp is mouthblown, reminiscent of traditional methods. The Oran line utilises artisan techniques and modern technologies in one design. www.kreon.com

darc is a magazine supplement from mondo*arc focusing on decorative lighting in architecture. Published four times a year, darc delivers insights into projects where the physical form of the fixtures themselves actively add to the aesthetic of a space.