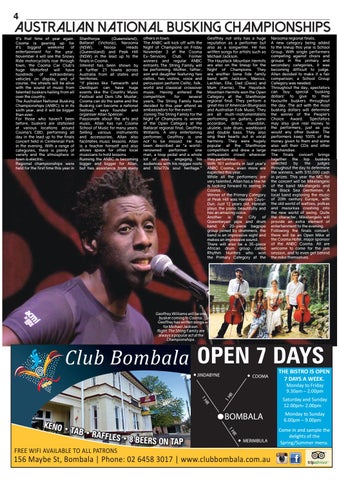 Australian National Busking Championships It’s that time of year again. Cooma is gearing up for it’s biggest weekend of entertainment for the year. November 4 will see the Snowy Ride motorcyclists roar through town, the Cooma Car Club’s huge Motorfest will have hundreds of extraordinary vehicles on display, and of course, the streets will be alive with the sound of music from talented buskers hailing from all over the country. The Australian National Busking Championships (ANBC) is in its sixth year, and it will be bigger than ever. For those who haven’t been before, buskers are stationed at various locations around Cooma’s CBD, performing all day in the lead up to the finals concert held in Centennial Park in the evening. With a range of categories, there is plenty of variety and the atmosphere in town is electric. Regional championships were held for the first time this year in

Stanthorpe (Queensland), Ballarat (Victoria), Narooma (NSW), Noosa Heads (Queensland) and Peak Hill (NSW) in the lead up to the finals in Cooma. Interest has been shown by a further 21 towns across Australia from all states and territories. “If places like Tamworth and Deniliquin can have huge events like the Country Music Festival and Deni Ute Muster, Cooma can do the same and the Busking can become a national festival,” says founder and organiser Allan Spencer. Passionate about the arts and music, Allan has run Cooma School of Music for many years. Selling various instruments and accessories, Allan also facilitates music lessons. Allan is a teacher himself and also allows space for other local musicians to hold lessons. Running the ANBC is becoming bigger and bigger for Allan, but has assistance from many

others in town. The ANBC will kick off with the Night of Champions on Friday November 3 at the Cooma Ex-Services Club. Former winners and regular ANBC entrants The String Family will be performing. Mother, father, son and daughter featuring two cellos, two violins, voice and percussion perform Celtic, folk, world and classical crossover music. Having entered the competition for several years, The String Family have decided to this year attend as ambassadors for the event. Joining The String Family for the Night of Champions is winner of the Open Category at the Ballarat regional final, Geoffrey Williams. A very entertaining performer, Geoffrey is one not to be missed. He has been described as “a worldrenowned performer: one man, a loop pedal and a whole lot of soul, engaging his audiences with his reggae roots and 60s/70s soul heritage.”

Geoffrey not only has a huge reputation as a performer but also as a songwriter. He has written songs for artists such as Michael Jackson. The Haystack Mountain Hermits are also on the lineup for the Night of Champions. They are another bona fide family band with Jackson, Marcus, Lachlan, Ella, Dad (Dave) and Mum (Kerrie). The Haystack Mountain Hermits won the Open Category at the Stanthorpe regional final. They perform a great mix of American Bluegrass and Australian Folk Music. They are all multi-instrumentalists performing on guitars, piano accordion, dobro, mandolin, ukulele, side drum, washboard and double bass. They also sing their hearts out in vocal harmony. They were hugely popular at the Stanthorpe competition and drew a large enthusiastic crowd wherever they performed. With 161 entrants in last year’s ANBC Cooma, even more are expected this year. While all the performers are very talented, Allan has a few he is looking forward to seeing in Cooma. Winner of the Primary Category at Peak Hill was Hannah CayoDun. Just 12 years old, Hannah plays the piano beautifully and has an amazing voice. Another is the City of Queanbeyan pipe and drum band. A 20-piece bagpipe group joined by drummers, the band is an impressive sight and makes an impressive sound. There will also be a 35-piece African drum group called Rhythm Hunters who won the Primary Category at the

Narooma regional finals. A new category being added to the lineup this year is School Group. With single performers competing against choirs and groups in the primary and secondary categories, it was becoming difficult to judge. Allan decided to make it a fair comparison; a School Group Category was needed. Throughout the day, spectators can buy special ‘busking dollars’ to give to their favourite buskers throughout the day. The act with the most busking dollars will determine the winner of the People’s Choice Award. Spectators may also give real money to the performers, just as you would any other busker. The performers keep 100% of the money given to them and some also sell their CDs and other merchandise. The finals concert brings together the top buskers selected by the judges throughout the day to determine the winners, with $10,000 cash in prizes. This year the MC for the concert will be Mikelangelo of the band Mikelangelo and the Black Sea Gentlemen. A local band exploring the music of 20th century Europe, with the old world of waltzes, polkas and mazurkas crashing into the new world of swing. Quite the character, Mikelangelo will provide an extra element of entertainment to the evening. Following the finals concert, there will be an Open Mike at the Cooma Hotel, major sponsor of the ANBC Cooma. All are welcome to come for the jam session, and to even get behind the mike themselves.

Geoffrey Williams will be one busker coming to Cooma. Geoffrey has written songs for Michael Jackson. Right: The String Family are always a popular act at the Championships.

THE BISTRO IS OPEN 7 DAYS A WEEK.

FREE WIFI AVAILABLE TO ALL PATRONS

Monday to Sunday 6.00pm – 9.00pm Come in and sample the delights of the Spring/Summer menu.