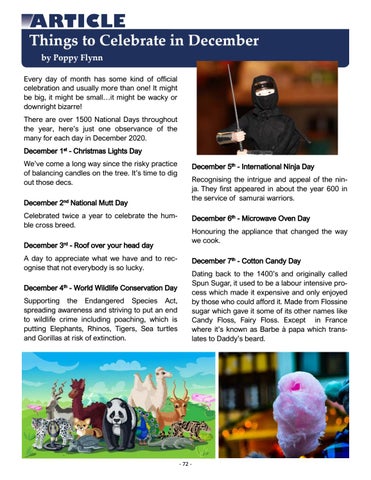 Things to Celebrate in December by Poppy Flynn Every day of month has some kind of official celebration and usually more than one! It might be big, it might be small…it might be wacky or downright bizarre! There are over 1500 National Days throughout the year, here’s just one observance of the many for each day in December 2020. December 1st - Christmas Lights Day We’ve come a long way since the risky practice of balancing candles on the tree. It’s time to dig out those decs.

December 5th - International Ninja Day Recognising the intrigue and appeal of the ninja. They first appeared in about the year 600 in the service of samurai warriors.

Celebrated twice a year to celebrate the humble cross breed.

December 3rd - Roof over your head day A day to appreciate what we have and to recognise that not everybody is so lucky.

December 7th - Cotton Candy Day Dating back to the 1400’s and originally called Spun Sugar, it used to be a labour intensive process which made it expensive and only enjoyed by those who could afford it. Made from Flossine sugar which gave it some of its other names like Candy Floss, Fairy Floss. Except in France where it’s known as Barbe à papa which translates to Daddy’s beard.