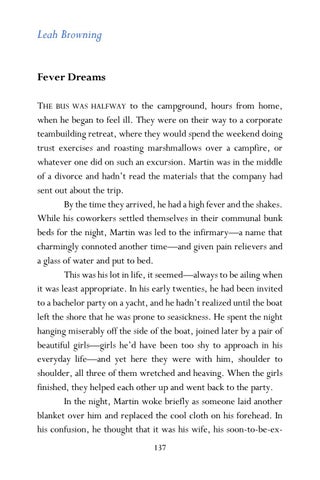 Leah Browning Fever Dreams THE BUS WAS HALFWAY to the campground, hours from home, when he began to feel ill. They were on their way to a corporate teambuilding retreat, where they would spend the weekend doing trust exercises and roasting marshmallows over a campfire, or whatever one did on such an excursion. Martin was in the middle of a divorce and hadn’t read the materials that the company had sent out about the trip. By the time they arrived, he had a high fever and the shakes. While his coworkers settled themselves in their communal bunk beds for the night, Martin was led to the infirmary—a name that charmingly connoted another time—and given pain relievers and a glass of water and put to bed. This was his lot in life, it seemed—always to be ailing when it was least appropriate. In his early twenties, he had been invited to a bachelor party on a yacht, and he hadn’t realized until the boat left the shore that he was prone to seasickness. He spent the night hanging miserably off the side of the boat, joined later by a pair of beautiful girls—girls he’d have been too shy to approach in his everyday life—and yet here they were with him, shoulder to shoulder, all three of them wretched and heaving. When the girls finished, they helped each other up and went back to the party. In the night, Martin woke briefly as someone laid another blanket over him and replaced the cool cloth on his forehead. In his confusion, he thought that it was his wife, his soon-to-be-ex137

The Mojave River Review spring/summer 2019 issue spotlights superb poetry and prose by brilliant contributors from around the globe. Enjoy 285 pages of the best in contemporary writing and photography. 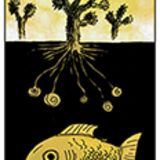