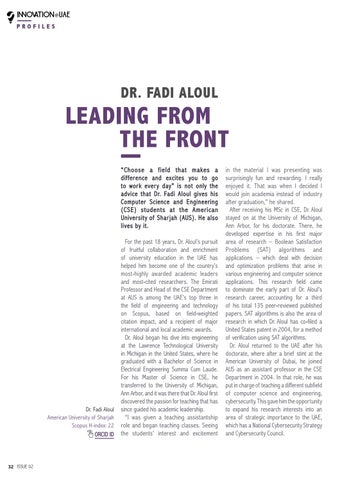 LEADING FROM THE FRONT “Choose a field that makes a difference and excites you to go to wor k ever y day” is not only the advice that Dr. Fadi Aloul gives his Computer Science and Engineering (CSE) students at the American Univer sity of Shar jah (AUS). He also lives by it.

For the past 18 years, Dr. Aloul’s pursuit of fruitful collaboration and enrichment of university education in the UAE has helped him become one of the country’s most-highly awarded academic leaders and most-cited researchers. The Emirati Professor and Head of the CSE Department at AUS is among the UAE’s top three in the field of engineering and technology on Scopus, based on field-weighted citation impact, and a recipient of major international and local academic awards. Dr. Aloul began his dive into engineering at the Lawrence Technological University in Michigan in the United States, where he graduated with a Bachelor of Science in Electrical Engineering Summa Cum Laude. For his Master of Science in CSE, he transferred to the University of Michigan, Ann Arbor, and it was there that Dr. Aloul first discovered the passion for teaching that has since guided his academic leadership. “I was given a teaching assistantship role and began teaching classes. Seeing the students’ interest and excitement

in the material I was presenting was surprisingly fun and rewarding. I really enjoyed it. That was when I decided I would join academia instead of industry after graduation,” he shared. After receiving his MSc in CSE, Dr. Aloul stayed on at the University of Michigan, Ann Arbor, for his doctorate. There, he developed expertise in his first major area of research – Boolean Satisfaction Problems (SAT) algorithms and applications – which deal with decision and optimization problems that arise in various engineering and computer science applications. This research field came to dominate the early part of Dr. Aloul’s research career, accounting for a third of his total 135 peer-reviewed published papers. SAT algorithms is also the area of research in which Dr. Aloul has co-filed a United States patent in 2004, for a method of verification using SAT algorithms. Dr. Aloul returned to the UAE after his doctorate, where after a brief stint at the American University of Dubai, he joined AUS as an assistant professor in the CSE Department in 2004. In that role, he was put in charge of teaching a different subfield of computer science and engineering, cybersecurity. This gave him the opportunity to expand his research interests into an area of strategic importance to the UAE, which has a National Cybersecurity Strategy and Cybersecurity Council. 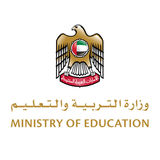