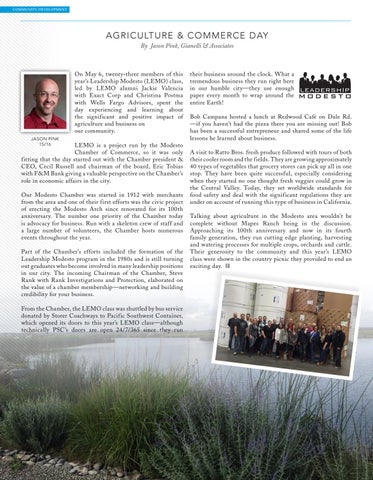 On May 6, twenty-three members of this year’s Leadership Modesto (LEMO) class, led by LEMO alumni Jackie Valencia with Exact Corp and Christina Postma with Wells Fargo Advisors, spent the day experiencing and learning about the signif icant and positive impact of agriculture and business on our community. JASON PINK 15/16

LEMO is a project run by the Modesto Chamber of Commerce, so it was only f itting that the day started out with the Chamber president & CEO, Cecil Russell and chairman of the board, Eric Tobias with F&M Bank giving a valuable perspective on the Chamber’s role in economic affairs in the city. Our Modesto Chamber was started in 1912 with merchants from the area and one of their f irst efforts was the civic project of erecting the Modesto Arch since renovated for its 100th anniversary. The number one priority of the Chamber today is advocacy for business. Run with a skeleton crew of staff and a large number of volunteers, the Chamber hosts numerous events throughout the year. Part of the Chamber's efforts included the formation of the Leadership Modesto program in the 1980s and is still turning out graduates who become involved in many leadership positions in our city. The incoming Chairman of the Chamber, Steve Rank with Rank Investigations and Protection, elaborated on the value of a chamber membership—networking and building credibility for your business. From the Chamber, the LEMO class was shuttled by bus service donated by Storer Coachways to Pacif ic Southwest Container, which opened its doors to this year’s LEMO class—although technically PSC’s doors are open 24/7/365 since they run

Modesto Chamber of Commerce I PROGRESS

their business around the clock. What a tremendous business they run right here in our humble city—they use enough paper every month to wrap around the entire Earth! Bob Campana hosted a lunch at Redwood Café on Dale Rd. —if you haven’t had the pizza there you are missing out! Bob has been a successful entrepreneur and shared some of the life lessons he learned about business. A visit to Ratto Bros. fresh produce followed with tours of both their cooler room and the f ields. They are growing approximately 40 types of vegetables that grocery stores can pick up all in one stop. They have been quite successful, especially considering when they started no one thought fresh veggies could grow in the Central Valley. Today, they set worldwide standards for food safety and deal with the signif icant regulations they are under on account of running this type of business in California. Talking about agriculture in the Modesto area wouldn’t be complete without Mapes Ranch being in the discussion. Approaching its 100th anniversary and now in its fourth family generation, they run cutting edge planting, harvesting and watering processes for multiple crops, orchards and cattle. Their generosity to the community and this year’s LEMO class were shown in the country picnic they provided to end an exciting day. P 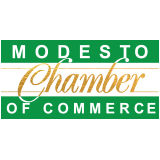