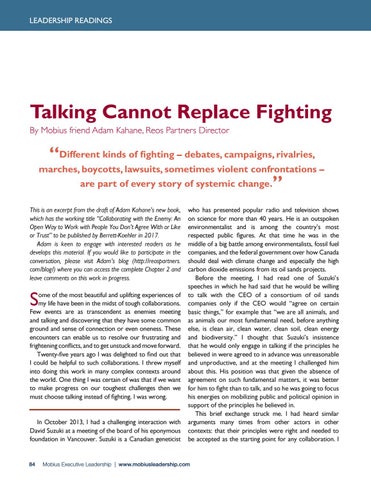 This is an excerpt from the draft of Adam Kahane’s new book, which has the working title “Collaborating with the Enemy: An Open Way to Work with People You Don’t Agree With or Like or Trust” to be published by Berrett-Koehler in 2017. Adam is keen to engage with interested readers as he develops this material. If you would like to participate in the conversation, please visit Adam’s blog (http://reospartners. com/blog/) where you can access the complete Chapter 2 and leave comments on this work in progress.

ome of the most beautiful and uplifting experiences of my life have been in the midst of tough collaborations. Few events are as transcendent as enemies meeting and talking and discovering that they have some common ground and sense of connection or even oneness. These encounters can enable us to resolve our frustrating and frightening conflicts, and to get unstuck and move forward. Twenty-five years ago I was delighted to find out that I could be helpful to such collaborations. I threw myself into doing this work in many complex contexts around the world. One thing I was certain of was that if we want to make progress on our toughest challenges then we must choose talking instead of fighting. I was wrong.

In October 2013, I had a challenging interaction with David Suzuki at a meeting of the board of his eponymous foundation in Vancouver. Suzuki is a Canadian geneticist

who has presented popular radio and television shows on science for more than 40 years. He is an outspoken environmentalist and is among the country’s most respected public figures. At that time he was in the middle of a big battle among environmentalists, fossil fuel companies, and the federal government over how Canada should deal with climate change and especially the high carbon dioxide emissions from its oil sands projects. Before the meeting, I had read one of Suzuki’s speeches in which he had said that he would be willing to talk with the CEO of a consortium of oil sands companies only if the CEO would “agree on certain basic things,” for example that “we are all animals, and as animals our most fundamental need, before anything else, is clean air, clean water, clean soil, clean energy and biodiversity.” I thought that Suzuki’s insistence that he would only engage in talking if the principles he believed in were agreed to in advance was unreasonable and unproductive, and at the meeting I challenged him about this. His position was that given the absence of agreement on such fundamental matters, it was better for him to fight than to talk, and so he was going to focus his energies on mobilizing public and political opinion in support of the principles he believed in. This brief exchange struck me. I had heard similar arguments many times from other actors in other contexts: that their principles were right and needed to be accepted as the starting point for any collaboration. I