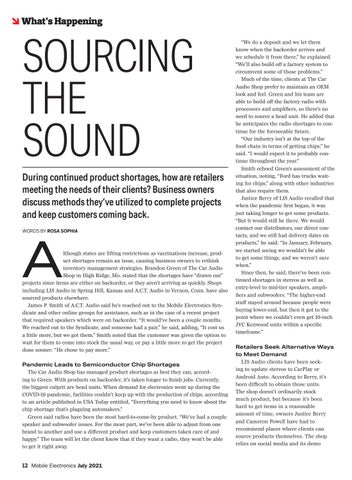 SOURCING THE SOUND During continued product shortages, how are retailers meeting the needs of their clients? Business owners discuss methods they’ve utilized to complete projects and keep customers coming back. WORDS BY ROSA SOPHIA

lthough states are lifting restrictions as vaccinations increase, product shortages remain an issue, causing business owners to rethink inventory management strategies. Brandon Green of The Car Audio Shop in High Ridge, Mo. stated that the shortages have “drawn out” projects since items are either on backorder, or they aren’t arriving as quickly. Shops including LIS Audio in Spring Hill, Kansas and A.C.T. Audio in Vernon, Conn. have also sourced products elsewhere. James P. Smith of A.C.T. Audio said he’s reached out to the Mobile Electronics Syndicate and other online groups for assistance, such as in the case of a recent project that required speakers which were on backorder. “It would’ve been a couple months. We reached out to the Syndicate, and someone had a pair,” he said, adding, “It cost us a little more, but we got them.” Smith noted that the customer was given the option to wait for them to come into stock the usual way, or pay a little more to get the project done sooner: “He chose to pay more.” Pandemic Leads to Semiconductor Chip Shortages The Car Audio Shop has managed product shortages as best they can, according to Green. With products on backorder, it’s taken longer to finish jobs. Currently, the biggest culprit are head units. When demand for electronics went up during the COVID-19 pandemic, facilities couldn’t keep up with the production of chips, according to an article published in USA Today entitled, “Everything you need to know about the chip shortage that’s plaguing automakers.” Green said radios have been the most hard-to-come-by product. “We’ve had a couple speaker and subwoofer issues. For the most part, we’ve been able to adjust from one brand to another and use a different product and keep customers taken care of and happy.” The team will let the client know that if they want a radio, they won’t be able to get it right away.

“We do a deposit and we let them know when the backorder arrives and we schedule it from there,” he explained. “We’ll also build off a factory system to circumvent some of those problems.” Much of the time, clients at The Car Audio Shop prefer to maintain an OEM look and feel. Green and his team are able to build off the factory radio with processors and amplifiers, so there’s no need to source a head unit. He added that he anticipates the radio shortages to continue for the foreseeable future. “Our industry isn’t at the top of the food chain in terms of getting chips,” he said. “I would expect it to probably continue throughout the year.” Smith echoed Green’s assessment of the situation, noting, “Ford has trucks waiting for chips,” along with other industries that also require them. Justice Berry of LIS Audio recalled that when the pandemic first began, it was just taking longer to get some products. “But it would still be there. We would contact our distributors, our direct contacts, and we still had delivery dates on products,” he said. “In January, February, we started seeing we wouldn’t be able to get some things, and we weren’t sure when.” Since then, he said, there’ve been continued shortages in stereos as well as entry-level to mid-tier speakers, amplifiers and subwoofers. “The higher-end stuff stayed around because people were buying lower-end, but then it got to the point where we couldn’t even get 10-inch JVC Kenwood units within a specific timeframe.” Retailers Seek Alternative Ways to Meet Demand LIS Audio clients have been seeking to update stereos to CarPlay or Android Auto. According to Berry, it’s been difficult to obtain those units. The shop doesn’t ordinarily stock much product, but because it’s been hard to get items in a reasonable amount of time, owners Justice Berry and Cameron Powell have had to recommend places where clients can source products themselves. The shop relies on social media and its demo 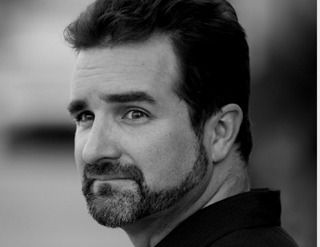 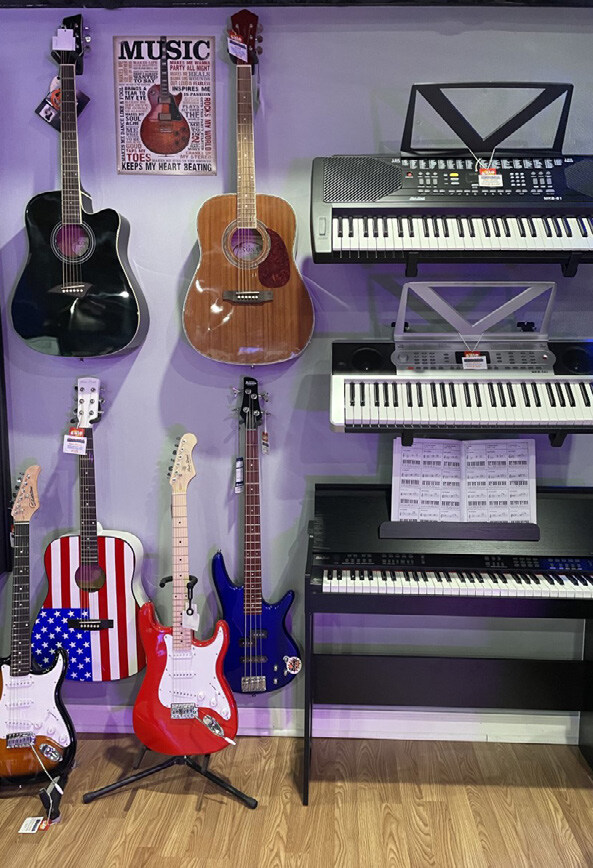