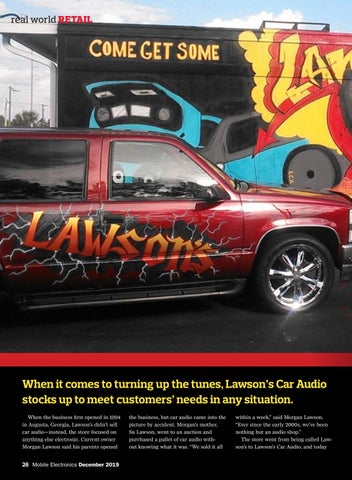 When it comes to turning up the tunes, Lawson’s Car Audio stocks up to meet customers’ needs in any situation. When the business first opened in 1994 in Augusta, Georgia, Lawson’s didn’t sell car audio—instead, the store focused on anything else electronic. Current owner Morgan Lawson said his parents opened

the business, but car audio came into the picture by accident. Morgan’s mother, Su Lawson, went to an auction and purchased a pallet of car audio without knowing what it was. “We sold it all

within a week,” said Morgan Lawson. “Ever since the early 2000s, we’ve been nothing but an audio shop.” The store went from being called Lawson’s to Lawson’s Car Audio, and today