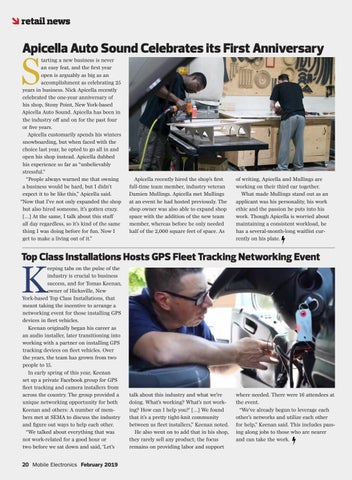 tarting a new business is never an easy feat, and the first year open is arguably as big as an accomplishment as celebrating 25 years in business. Nick Apicella recently celebrated the one-year anniversary of his shop, Stony Point, New York-based Apicella Auto Sound. Apicella has been in the industry off and on for the past four or five years. Apicella customarily spends his winters snowboarding, but when faced with the choice last year, he opted to go all in and open his shop instead. Apicella dubbed his experience so far as “unbelievably stressful.” “People always warned me that owning a business would be hard, but I didn’t expect it to be like this,” Apicella said. “Now that I’ve not only expanded the shop but also hired someone, it’s gotten crazy. […] At the same, I talk about this stuff all day regardless, so it’s kind of the same thing I was doing before for fun. Now I get to make a living out of it.”

Apicella recently hired the shop’s first full-time team member, industry veteran Damien Mullings. Apicella met Mullings at an event he had hosted previously. The shop owner was also able to expand shop space with the addition of the new team member, whereas before he only needed half of the 2,000 square feet of space. As

of writing, Apicella and Mullings are working on their third car together. What made Mullings stand out as an applicant was his personality, his work ethic and the passion he puts into his work. Though Apicella is worried about maintaining a consistent workload, he has a several-month-long waitlist currently on his plate.

eeping tabs on the pulse of the industry is crucial to business success, and for Tomas Keenan, owner of Hicksville, New York-based Top Class Installations, that meant taking the incentive to arrange a networking event for those installing GPS devices in fleet vehicles. Keenan originally began his career as an audio installer, later transitioning into working with a partner on installing GPS tracking devices on fleet vehicles. Over the years, the team has grown from two people to 15. In early spring of this year, Keenan set up a private Facebook group for GPS fleet tracking and camera installers from across the country. The group provided a unique networking opportunity for both Keenan and others: A number of members met at SEMA to discuss the industry and figure out ways to help each other. “We talked about everything that was not work-related for a good hour or two before we sat down and said, ‘Let’s

talk about this industry and what we’re doing. What’s working? What’s not working? How can I help you?’ […] We found that it’s a pretty tight-knit community between us fleet installers,” Keenan noted. He also went on to add that in his shop, they rarely sell any product; the focus remains on providing labor and support

where needed. There were 16 attendees at the event. “We’ve already begun to leverage each other’s networks and utilize each other for help,” Keenan said. This includes passing along jobs to those who are nearer and can take the work. 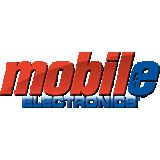