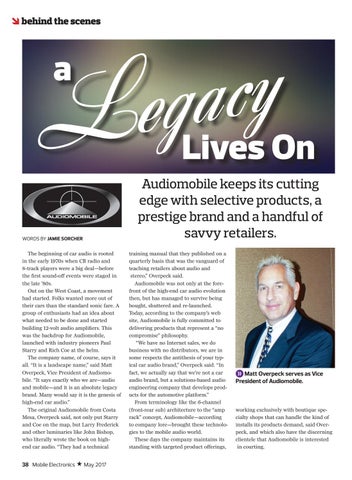 a Lives On WORDS BY JAMIE SORCHER

The beginning of car audio is rooted in the early 1970s when CB radio and 8-track players were a big deal—before the first sound-off events were staged in the late ’80s. Out on the West Coast, a movement had started. Folks wanted more out of their cars than the standard sonic fare. A group of enthusiasts had an idea about what needed to be done and started building 12-volt audio amplifiers. This was the backdrop for Audiomobile, launched with industry pioneers Paul Starry and Rich Coe at the helm. The company name, of course, says it all. “It is a landscape name,” said Matt Overpeck, Vice President of Audiomobile. “It says exactly who we are—audio and mobile—and it is an absolute legacy brand. Many would say it is the genesis of high-end car audio.” The original Audiomobile from Costa Mesa, Overpeck said, not only put Starry and Coe on the map, but Larry Frederick and other luminaries like John Bishop, who literally wrote the book on highend car audio. “They had a technical

Audiomobile keeps its cutting edge with selective products, a prestige brand and a handful of savvy retailers. training manual that they published on a quarterly basis that was the vanguard of teaching retailers about audio and stereo,” Overpeck said. Audiomobile was not only at the forefront of the high-end car audio evolution then, but has managed to survive being bought, shuttered and re-launched. Today, according to the company’s web site, Audiomobile is fully committed to delivering products that represent a “no compromise” philosophy. “We have no Internet sales, we do business with no distributors, we are in some respects the antithesis of your typical car audio brand,” Overpeck said. “In fact, we actually say that we’re not a car audio brand, but a solutions-based audio engineering company that develops products for the automotive platform.” From terminology like the 6-channel (front-rear sub) architecture to the “amp rack” concept, Audiomobile—according to company lore—brought these technologies to the mobile audio world. These days the company maintains its standing with targeted product offerings,

working exclusively with boutique specialty shops that can handle the kind of installs its products demand, said Overpeck, and which also have the discerning clientele that Audiomobile is interested in courting.