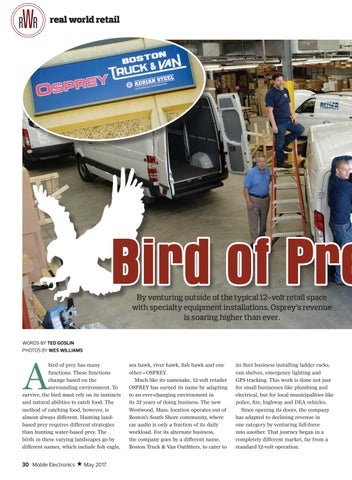 By venturing outside of the typical 12-volt retail space with specialty equipment installations, Osprey’s revenue is soaring higher than ever. WORDS BY TED GOSLIN PHOTOS BY WES WILLIAMS

bird of prey has many functions. These functions change based on the surrounding environment. To survive, the bird must rely on its instincts and natural abilities to catch food. The method of catching food, however, is almost always different. Hunting landbased prey requires different strategies than hunting water-based prey. The birds in these varying landscapes go by different names, which include fish eagle,

sea hawk, river hawk, fish hawk and one other—OSPREY. Much like its namesake, 12-volt retailer OSPREY has earned its name by adapting to an ever-changing environment in its 32 years of doing business. The new Westwood, Mass. location operates out of Boston’s South Shore community, where car audio is only a fraction of its daily workload. For its alternate business, the company goes by a different name, Boston Truck &amp; Van Outfitters, to cater to

its fleet business installing ladder racks, van shelves, emergency lighting and GPS tracking. This work is done not just for small businesses like plumbing and electrical, but for local municipalities like police, fire, highway and DEA vehicles. Since opening its doors, the company has adapted to declining revenue in one category by venturing full-force into another. That journey began in a completely different market, far from a standard 12-volt operation.