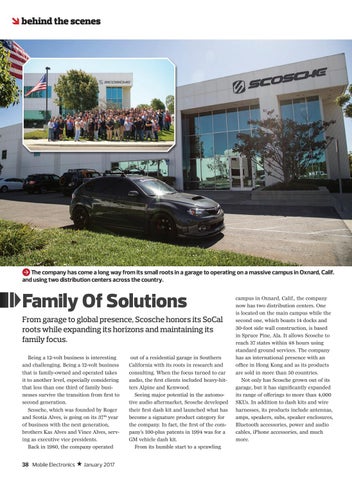 The company has come a long way from its small roots in a garage to operating on a massive campus in Oxnard, Calif. and using two distribution centers across the country.

Family Of Solutions From garage to global presence, Scosche honors its SoCal roots while expanding its horizons and maintaining its family focus. Being a 12-volt business is interesting and challenging. Being a 12-volt business that is family-owned and operated takes it to another level, especially considering that less than one third of family businesses survive the transition from first to second generation. Scosche, which was founded by Roger and Scotia Alves, is going on its 37 th year of business with the next generation, brothers Kas Alves and Vince Alves, serving as executive vice presidents. Back in 1980, the company operated

out of a residential garage in Southern California with its roots in research and consulting. When the focus turned to car audio, the first clients included heavy-hitters Alpine and Kenwood. Seeing major potential in the automotive audio aftermarket, Scosche developed their first dash kit and launched what has become a signature product category for the company. In fact, the first of the company’s 100-plus patents in 1994 was for a GM vehicle dash kit. From its humble start to a sprawling

campus in Oxnard, Calif., the company now has two distribution centers. One is located on the main campus while the second one, which boasts 14 docks and 30-foot side wall construction, is based in Spruce Pine, Ala. It allows Scosche to reach 37 states within 48 hours using standard ground services. The company has an international presence with an office in Hong Kong and as its products are sold in more than 50 countries. Not only has Scosche grown out of its garage, but it has significantly expanded its range of offerings to more than 4,000 SKUs. In addition to dash kits and wire harnesses, its products include antennas, amps, speakers, subs, speaker enclosures, Bluetooth accessories, power and audio cables, iPhone accessories, and much more.