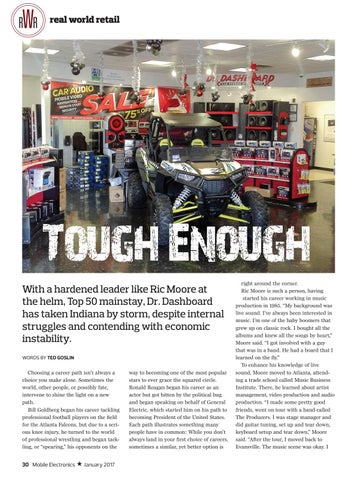 With a hardened leader like Ric Moore at the helm, Top 50 mainstay, Dr. Dashboard has taken Indiana by storm, despite internal struggles and contending with economic instability. WORDS BY TED GOSLIN

Choosing a career path isn’t always a choice you make alone. Sometimes the world, other people, or possibly fate, intervene to shine the light on a new path. Bill Goldberg began his career tackling professional football players on the field for the Atlanta Falcons, but due to a serious knee injury, he turned to the world of professional wrestling and began tackling, or “spearing,” his opponents on the

way to becoming one of the most popular stars to ever grace the squared circle. Ronald Reagan began his career as an actor but got bitten by the political bug and began speaking on behalf of General Electric, which started him on his path to becoming President of the United States. Each path illustrates something many people have in common: While you don’t always land in your first choice of careers, sometimes a similar, yet better option is

right around the corner. Ric Moore is such a person, having started his career working in music production in 1985. “My background was live sound. I’ve always been interested in music. I’m one of the baby boomers that grew up on classic rock. I bought all the albums and knew all the songs by heart,” Moore said. “I got involved with a guy that was in a band. He had a board that I learned on the fly.” To enhance his knowledge of live sound, Moore moved to Atlanta, attending a trade school called Music Business Institute. There, he learned about artist management, video production and audio production. “I made some pretty good friends, went on tour with a band called The Producers. I was stage manager and did guitar tuning, set up and tear down, keyboard setup and tear down,” Moore said. “After the tour, I moved back to Evansville. The music scene was okay. I