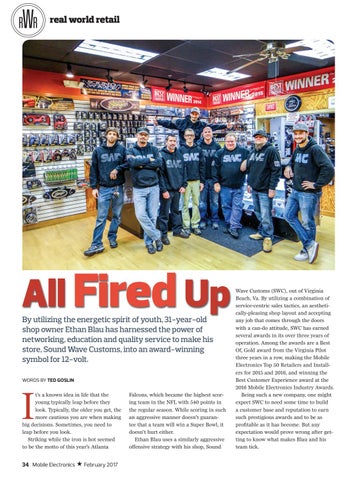 All Fired Up By utilizing the energetic spirit of youth, 31-year-old shop owner Ethan Blau has harnessed the power of networking, education and quality service to make his store, Sound Wave Customs, into an award-winning symbol for 12-volt. WORDS BY TED GOSLIN

t&#39;s a known idea in life that the young typically leap before they look. Typically, the older you get, the more cautious you are when making big decisions. Sometimes, you need to leap before you look. Striking while the iron is hot seemed to be the motto of this year&#39;s Atlanta

Falcons, which became the highest scoring team in the NFL with 540 points in the regular season. While scoring in such an aggressive manner doesn&#39;t guarantee that a team will win a Super Bowl, it doesn&#39;t hurt either. Ethan Blau uses a similarly aggressive offensive strategy with his shop, Sound

Wave Customs (SWC), out of Virginia Beach, Va. By utilizing a combination of service-centric sales tactics, an aesthetically-pleasing shop layout and accepting any job that comes through the doors with a can-do attitude, SWC has earned several awards in its over three years of operation. Among the awards are a Best Of, Gold award from the Virginia Pilot three years in a row, making the Mobile Electronics Top 50 Retailers and Installers for 2015 and 2016, and winning the Best Customer Experience award at the 2016 Mobile Electronics Industry Awards. Being such a new company, one might expect SWC to need some time to build a customer base and reputation to earn such prestigious awards and to be as profitable as it has become. But any expectation would prove wrong after getting to know what makes Blau and his team tick.