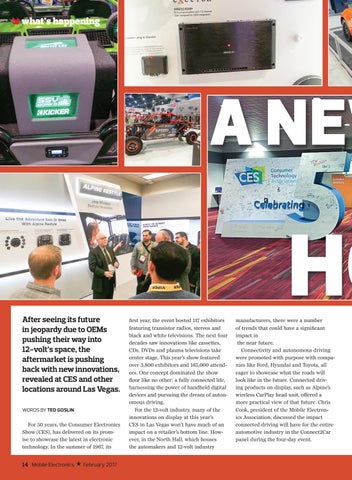 A NEW After seeing its future in jeopardy due to OEMs pushing their way into 12-volt’s space, the aftermarket is pushing back with new innovations, revealed at CES and other locations around Las Vegas. WORDS BY TED GOSLIN

For 50 years, the Consumer Electronics Show (CES), has delivered on its promise to showcase the latest in electronic technology. In the summer of 1967, its

first year, the event hosted 117 exhibitors featuring transistor radios, stereos and black and white televisions. The next four decades saw innovations like cassettes, CDs, DVDs and plasma televisions take center stage. This year’s show featured over 3,800 exhibitors and 165,000 attendees. One concept dominated the show floor like no other: a fully connected life, harnessing the power of handheld digital devices and pursuing the dream of autonomous driving. For the 12-volt industry, many of the innovations on display at this year’s CES in Las Vegas won’t have much of an impact on a retailer’s bottom line. However, in the North Hall, which houses the automakers and 12-volt industry

manufacturers, there were a number of trends that could have a significant impact in the near future. Connectivity and autonomous driving were promoted with purpose with companies like Ford, Hyundai and Toyota, all eager to showcase what the roads will look like in the future. Connected driving products on display, such as Alpine’s wireless CarPlay head unit, offered a more practical view of that future. Chris Cook, president of the Mobile Electronics Association, discussed the impact connected driving will have for the entire automotive industry in the Connect2Car panel during the four-day event.