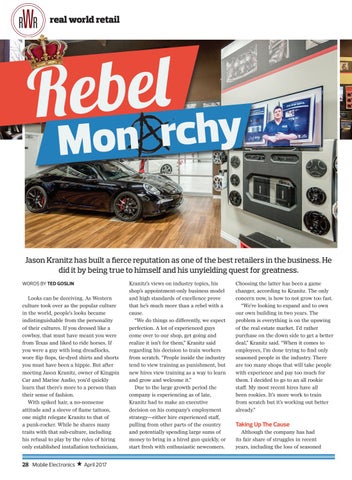 Jason Kranitz has built a fierce reputation as one of the best retailers in the business. He did it by being true to himself and his unyielding quest for greatness. WORDS BY TED GOSLIN

Looks can be deceiving. As Western culture took over as the popular culture in the world, people’s looks became indistinguishable from the personality of their cultures. If you dressed like a cowboy, that must have meant you were from Texas and liked to ride horses. If you were a guy with long dreadlocks, wore flip flops, tie-dyed shirts and shorts you must have been a hippie. But after meeting Jason Kranitz, owner of Kingpin Car and Marine Audio, you’d quickly learn that there’s more to a person than their sense of fashion. With spiked hair, a no-nonsense attitude and a sleeve of flame tattoos, one might relegate Kranitz to that of a punk-rocker. While he shares many traits with that sub-culture, including his refusal to play by the rules of hiring only established installation technicians,

Kranitz’s views on industry topics, his shop’s appointment-only business model and high standards of excellence prove that he’s much more than a rebel with a cause. “We do things so differently, we expect perfection. A lot of experienced guys come over to our shop, get going and realize it isn’t for them,” Kranitz said regarding his decision to train workers from scratch. “People inside the industry tend to view training as punishment, but new hires view training as a way to learn and grow and welcome it.” Due to the large growth period the company is experiencing as of late, Kranitz had to make an executive decision on his company’s employment strategy—either hire experienced staff, pulling from other parts of the country and potentially spending large sums of money to bring in a hired gun quickly, or start fresh with enthusiastic newcomers.

Choosing the latter has been a game changer, according to Kranitz. The only concern now, is how to not grow too fast. “We’re looking to expand and to own our own building in two years. The problem is everything is on the upswing of the real estate market. I’d rather purchase on the down side to get a better deal,” Kranitz said. “When it comes to employees, I’m done trying to find only seasoned people in the industry. There are too many shops that will take people with experience and pay too much for them. I decided to go to an all rookie staff. My most recent hires have all been rookies. It’s more work to train from scratch but it’s working out better already.”

Taking Up The Cause Although the company has had its fair share of struggles in recent years, including the loss of seasoned