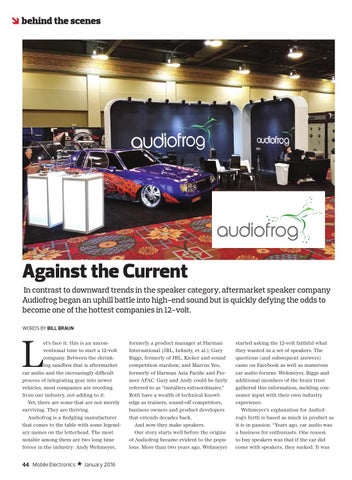 Against the Current In contrast to downward trends in the speaker category, aftermarket speaker company Audiofrog began an uphill battle into high-end sound but is quickly defying the odds to become one of the hottest companies in 12-volt. WORDS BY BILL BRAUN

et’s face it: this is an unconventional time to start a 12-volt company. Between the shrinking sandbox that is aftermarket car audio and the increasingly difficult process of integrating gear into newer vehicles, most companies are receding from our industry, not adding to it. Yet, there are some that are not merely surviving. They are thriving. Audiofrog is a fledgling manufacturer that comes to the table with some legendary names on the letterhead. The most notable among them are two long time forces in the industry: Andy Wehmeyer,

formerly a product manager at Harman International (JBL, Infinity, et al.); Gary Biggs, formerly of JBL, Kicker and sound competition stardom; and Marcus Yeo, formerly of Harman Asia Pacific and Pioneer APAC. Gary and Andy could be fairly referred to as “installers extraordinaire.” Both have a wealth of technical knowledge as trainers, sound-off competitors, business owners and product developers that extends decades back. And now they make speakers. Our story starts well before the origins of Audiofrog became evident to the populous. More than two years ago, Wehmeyer

started asking the 12-volt faithful what they wanted in a set of speakers. The questions (and subsequent answers) came on Facebook as well as numerous car audio forums. Wehmeyer, Biggs and additional members of the brain trust gathered this information, melding consumer input with their own industry experience. Wehmeyer’s explanation for Audiofrog’s birth is based as much in product as it is in passion. “Years ago, car audio was a business for enthusiasts. One reason to buy speakers was that if the car did come with speakers, they sucked. It was