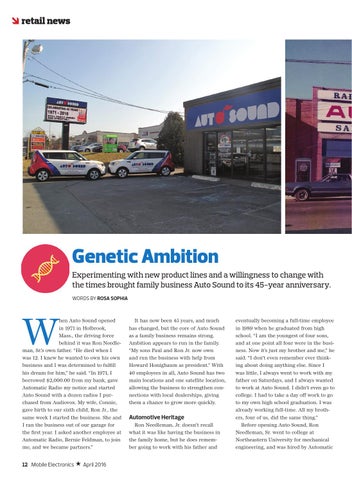 Genetic Ambition Experimenting with new product lines and a willingness to change with the times brought family business Auto Sound to its 45-year anniversary. WORDS BY ROSA SOPHIA

hen Auto Sound opened in 1971 in Holbrook, Mass., the driving force behind it was Ron Needleman, Sr.’s own father. “He died when I was 12. I knew he wanted to own his own business and I was determined to fulfill his dream for him,” he said. “In 1971, I borrowed $2,000.00 from my bank, gave Automatic Radio my notice and started Auto Sound with a dozen radios I purchased from Audiovox. My wife, Connie, gave birth to our sixth child, Ron Jr., the same week I started the business. She and I ran the business out of our garage for the first year. I asked another employee at Automatic Radio, Bernie Feldman, to join me, and we became partners.”

It has now been 45 years, and much has changed, but the core of Auto Sound as a family business remains strong. Ambition appears to run in the family. “My sons Paul and Ron Jr. now own and run the business with help from Howard Honigbaum as president.” With 40 employees in all, Auto Sound has two main locations and one satellite location, allowing the business to strengthen connections with local dealerships, giving them a chance to grow more quickly.

Automotive Heritage Ron Needleman, Jr. doesn’t recall what it was like having the business in the family home, but he does remember going to work with his father and

eventually becoming a full-time employee in 1989 when he graduated from high school. “I am the youngest of four sons, and at one point all four were in the business. Now it’s just my brother and me,” he said. “I don’t even remember ever thinking about doing anything else. Since I was little, I always went to work with my father on Saturdays, and I always wanted to work at Auto Sound. I didn’t even go to college. I had to take a day off work to go to my own high school graduation. I was already working full-time. All my brothers, four of us, did the same thing.” Before opening Auto Sound, Ron Needleman, Sr. went to college at Northeastern University for mechanical engineering, and was hired by Automatic