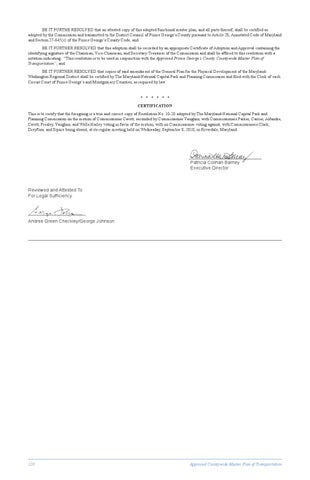 BE IT FURTHE RESOLVED that an attested copy of this adopted functional master plan, and all parts thereof, shall be certified as adopted by the Commission and transmitted to the District Council of Prince George’s County pursuant to Article 28, Annotated Code of Maryland and Section 27-645(c) of the Prince George’s County Code; and BE IT FURTHER RESOLVED that this adoption shall be recorded by an appropriate Certificate of Adoption and Approval containing the identifying signature of the Chairman, Vice-Chairman, and Secretary-Treasurer of the Commission and shall be affixed to this resolution with a notation indicating: “This resolution is to be used in conjunction with the Approved Prince George’s County Countywide Master Plan of Transportation”; and BE IT FURTHER RESOLVED that copies of said amendment of the General Plan for the Physical Development of the MarylandWashington Regional District shall be certified by The Maryland-National Capital Park and Planning Commission and filed with the Clerk of each Circuit Court of Prince George’s and Montgomery Counties, as required by law. * * * * * * CERTIFICATION This is to certify that the foregoing is a true and correct copy of Resolution No. 10-20 adopted by The Maryland-National Capital Park and Planning Commission on the motion of Commissioner Cavitt, seconded by Commissioner Vaughns, with Commissioners Parker, Carrier, Alfandre, Cavitt, Presley, Vaughns, and Wells-Harley voting in favor of the motion, with no Commissioner voting against, with Commissioners Clark, Dreyfuss, and Squire being absent, at its regular meeting held on Wednesday, September 8, 2010, in Riverdale, Maryland.