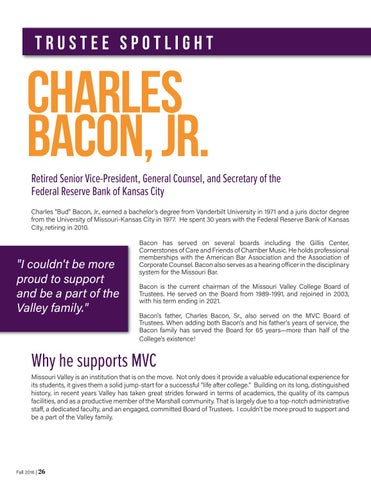 &quot;I couldn&#39;t be more proud to support and be a part of the Valley family.&quot;

Bacon has served on several boards including the Gillis Center, Cornerstones of Care and Friends of Chamber Music. He holds professional memberships with the American Bar Association and the Association of Corporate Counsel. Bacon also serves as a hearing officer in the disciplinary system for the Missouri Bar. Bacon is the current chairman of the Missouri Valley College Board of Trustees. He served on the Board from 1989-1991, and rejoined in 2003, with his term ending in 2021. Bacon&#39;s father, Charles Bacon, Sr., also served on the MVC Board of Trustees. When adding both Bacon&#39;s and his father&#39;s years of service, the Bacon family has served the Board for 65 yearsâ&amp;#x20AC;&amp;#x201D;more than half of the College&#39;s existence!

Why he supports MVC Missouri Valley is an institution that is on the move. Not only does it provide a valuable educational experience for its students, it gives them a solid jump-start for a successful &quot;life after college.&quot; Building on its long, distinguished history, in recent years Valley has taken great strides forward in terms of academics, the quality of its campus facilities, and as a productive member of the Marshall community. That is largely due to a top-notch administrative staff, a dedicated faculty, and an engaged, committed Board of Trustees. I couldn&#39;t be more proud to support and be a part of the Valley family.