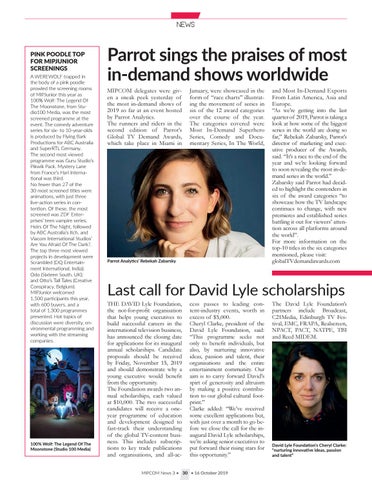 PINK POODLE TOP FOR MIPJUNIOR SCREENINGS A WEREWOLF trapped in the body of a pink poodle prowled the screening rooms of MIPJunior this year as 100% Wolf: The Legend Of The Moonstone, from Studio100 Media, was the most screened programme at the event. The comedy adventure series for six- to 10-year-olds is produced by Flying Bark Productions for ABC Australia and SuperRTL Germany. The second most viewed programme was Guru Studio’s Pikwik Pack. Mystery Lane from France’s Hari International was third. No fewer than 27 of the 30 most screened titles were animations, with just three live-action series in contention. Of these, the most screened was ZDF Enterprises’ teen vampire series, Heirs Of The Night, followed by ABC Australia’s Itch, and Viacom International Studios’ Are You Afraid Of The Dark?. The top three most viewed projects in development were Scrambled (DQ Entertainment International, India); Odo (Sixteen South, UK); and Otto’s Tall Tales (Creative Conspiracy, Belgium). MIPJunior welcomed 1,500 participants this year, with 600 buyers, and a total of 1,300 programmes presented. Hot topics of discussion were diversity, environmental programming and working with the streaming companies.

Parrot sings the praises of most in-demand shows worldwide MIPCOM delegates were given a sneak peek yesterday of the most in-demand shows of 2019 so far at an event hosted by Parrot Analytics. The runners and riders in the second edition of Parrot’s Global TV Demand Awards, which take place in Miami in

January, were showcased in the form of “race charts” illustrating the movement of series in six of the 12 award categories over the course of the year. The categories covered were Most In-Demand Superhero Series, Comedy and Documentary Series, In The World,

and Most In-Demand Exports From Latin America, Asia and Europe. “As we’re getting into the last quarter of 2019, Parrot is taking a look at how some of the biggest series in the world are doing so far,” Rebekah Zabarsky, Parrot’s director of marketing and executive producer of the Awards, said. “It’s a race to the end of the year and we’re looking forward to soon revealing the most in-demand series in the world.” Zabarsky said Parrot had decided to highlight the contenders in six of the award categories “to showcase how the TV landscape continues to change, with new premieres and established series battling it out for viewers’ attention across all platforms around the world”. For more information on the top-10 titles in the six categories mentioned, please visit: globalTVdemandawards.com

Last call for David Lyle scholarships THE DAVID Lyle Foundation, the not-for-profit organisation that helps young executives to build successful careers in the international television business, has announced the closing date for applications for its inaugural annual scholarships. Candidate proposals should be received by Friday, November 15, 2019 and should demonstrate why a young executive would benefit from the opportunity. The Foundation awards two annual scholarships, each valued at $10,000. The two successful candidates will receive a oneyear programme of education and development designed to fast-track their understanding of the global TV-content business. This includes subscriptions to key trade publications and organisations, and all-ac-

cess passes to leading content-industry events, worth in excess of $5,000. Cheryl Clarke, president of the David Lyle Foundation, said: “This programme seeks not only to benefit individuals, but also, by nurturing innovative ideas, passion and talent, their organisations and the entire entertainment community. Our aim is to carry forward David’s spirt of generosity and altruism by making a positive contribution to our global cultural footprint.” Clarke added: “We’ve received some excellent applications but, with just over a month to go before we close the call for the inaugural David Lyle scholarships, we’re asking senior executives to put forward their rising stars for this opportunity.” 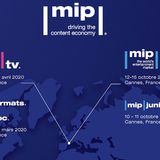