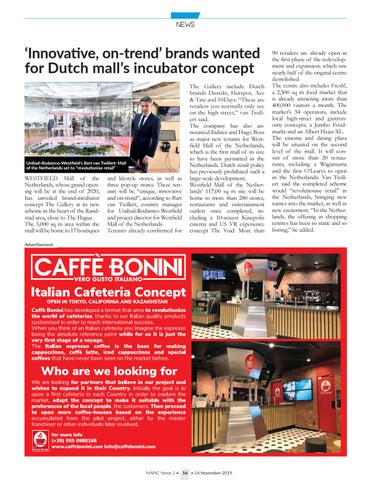 WESTFIELD Mall of the Netherlands, whose grand opening will be at the end of 2020, has unveiled brand-incubator concept The Gallery at its new scheme in the heart of the Randstad area, close to The Hague. The 3,000 sq m area within the mall will be home to 17 boutiques

and lifestyle stores, as well as three pop-up stores. These tenants will be “unique, innovative and on-trend”, according to Bart van Twillert, country manager for Unibail-Rodamco-Westfield and project director for Westfield Mall of the Netherlands. Tenants already confirmed for

The Gallery include Dutch brands Distrikt, Hutspot, Ace & Tate and 10Days. “These are retailers you normally only see on the high street,” van Twillert said. The company has also announced Inditex and Hugo Boss as major new tenants for Westfield Mall of the Netherlands, which is the first mall of its size to have been permitted in the Netherlands. Dutch retail policy has previously prohibited such a large-scale development. Westfield Mall of the Netherlands’ 117,00 sq m site will be home to more than 280 stores, restaurants and entertainment outlets once completed, including a 10-screen Kinepolis cinema and US VR experience concept The Void. More than

90 retailers are already open in the first phase of the redevelopment and expansion, which saw nearly half of the original centre demolished. The centre also includes Fresh!, a 2,500 sq m food market that is already attracting more than 400,000 visitors a month. The market’s 34 operators, include local high-street and gastronomy concepts, a Jumbo Foodmarkt and an Albert Heijn XL. The cinema and dining plaza will be situated on the second level of the mall. It will consist of more than 20 restaurants, including a Wagamama and the first O’Learys to open in the Netherlands. Van Twillert said the completed scheme would “revolutionise retail” in the Netherlands, bringing new names into the market, as well as new excitement. “In the Netherlands, the offering in shopping centres has been so static and so boring,” he added. 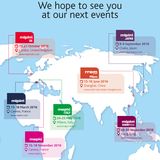