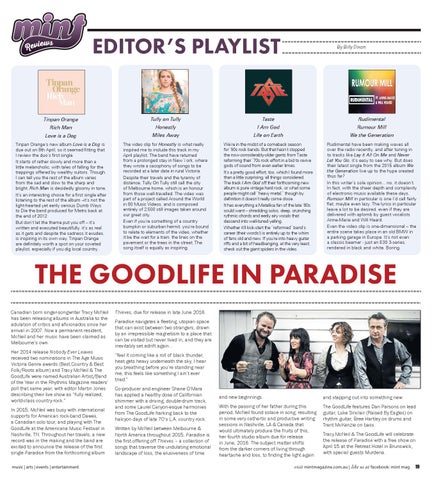 Love is a Dog

Tinpan Orange’s new album Love is a Dog is due out on 8th April, so it seemed fitting that I review the duo’s first single. It starts of rather slowly and more than a little melancholic, with tales of falling for the trappings offered by wealthy suitors. Though I can tell you the rest of the album varies from the sad and slow to the sharp and bright, Rich Man is decidedly gloomy in tone. It’s an interesting choice for a first single after listening to the rest of the album –it’s not the light-hearted yet eerily serious Dumb Ways to Die the band produced for Metro back at the end of 2012 But don’t let the theme put you off – it’s written and executed beautifully, it’s as real as it gets and despite the sadness it exudes, is inspiring in its own way. Tinpan Orange are definitely worth a spot on your coveted playlist, especially if you dig local country.

The video clip for Honestly is what really inspired me to include this track in my April playlist. The band have returned from a prolonged stay in New York, where they wrote a cacophony of songs to be recorded at a later date in rural Victoria. Despite their travels and the tyranny of distance, Tully On Tully still call the city of Melbourne home, which is an honour from those well-travelled. The video was part of a project called Around the World in 80 Music Videos, and is composed entirely of 2,500 still images taken around our great city. Even if you’re something of a country bumpkin or suburban hermit, you’re bound to relate to elements of the video, whether it be the wait for a train, the lines on the pavement or the trees in the street. The song itself is equally as inspiring.

We’re in the midst of a comeback season for ‘90s rock bands. But that hasn’t stopped the now-considerably-older gents from Taste reforming their ‘70s rock effort in a bid to revive gods of sound from even earlier times. It’s a pretty good effort, too, which I found more than a little surprising, all things considered. The track I Am God off their forthcoming new album is pure vintage hard rock, or what some people might call “heavy metal,” though by definition it doesn’t really come close. It has everything a Metallica fan of the late ‘80s could want – shredding solos, deep, crunching rythmic chords and eerily airy vocals that descend into well-tuned yelling. Whether it’ll kick-start the “reformed” band’s career (their words!) is entirely up to the whim of fans old and new. If you’re into heavy guitar riffs and a bit of headbanging, at the very least, check out the giant spiders in the video.

Rudimental have been making waves all over the radio recently, and after tuning in to tracks like Lay it All On Me and Never Let You Go, it’s easy to see why. But does their latest single from the 2015 album We the Generation live up to the hype created thus far? In this writer’s sole opinion... no, it doesn’t. In fact, with the sheer depth and complexity of electronic music available these days, Rumour Mill in particular is one I’d call fairly flat, maybe even lazy. The lyrics in particular leave a lot to be desired, even if they are delivered with aplomb by guest vocalists Anne-Marie and Will Heard. Even the video clip is one-dimensional – the entire scene takes place in an old BMW in a parking garage in Europe. It’s not even a classic beamer - just an E30 3-series, rendered in black and white. Boring.

THE GOODLIFE IN PARADISE Canadian born singer-songwriter Tracy McNeil has been releasing albums in Australia to the adulation of critics and aficionados since her arrival in 2007. Now a permanent resident, McNeil and her music have been claimed as Melbourne’s own. Her 2014 release Nobody Ever Leaves received two nominations in The Age Music Victoria Genre awards (Best Country & Best Folk/Roots album) and Tracy McNeil & The GoodLife were named Australian Artist/Band of the Year in the Rhythms Magazine readers’ poll that same year, with editor Martin Jones describing their live show as “fully realized, world-class country-rock.” In 2015, McNeil was busy with international supports for American rock-band Dawes, a Canadian solo tour, and playing with The GoodLife at the Americana Music Festival in Nashville, TN. Throughout her travels, a new record was in the making and the band are excited to announce the release of the first single Paradise from the forthcoming album music | arts | events | entertainment

Thieves, due for release in late June 2016. Paradise navigates a fleeting, utopian space that can exist between two strangers, drawn by an irrepressible magnetism to a place that can be visited but never lived in, and they are inevitably set adrift again... “feel it coming like a roll of black thunder, heat gets heavy underneath the sky, I hear you breathing before you’re standing near me, this feels like something I ain’t ever tried.” Co-producer and engineer Shane O’Mara has applied a healthy dose of Californian shimmer with a driving, double-drum track, and some Laurel Canyon-esque harmonies from The GoodLife harking back to the halcyon days of late 70’s L.A. country rock. Written by McNeil between Melbourne & North America throughout 2015, Paradise is the first offering off Thieves – a collection of songs that traverse the undulating emotional landscape of loss, the elusiveness of time

and stepping out into something new.

With the passing of her father during this period, McNeil found solace in song; resulting in some very cathartic and productive writing sessions in Nashville, LA & Canada that would ultimately produce the fruits of this, her fourth studio album due for release in June, 2016. The subject matter shifts from the darker corners of living through heartache and loss, to finding the light again

The GoodLife features Dan Parsons on lead guitar, Luke Sinclair (Raised By Eagles) on rhythm guitar, Bree Hartley on drums and Trent McKenzie on bass. Tracy McNeil & The GoodLife will celebrate the release of Paradise with a free show on April 15 at the Retreat Hotel in Brunswick, with special guests Murdena.