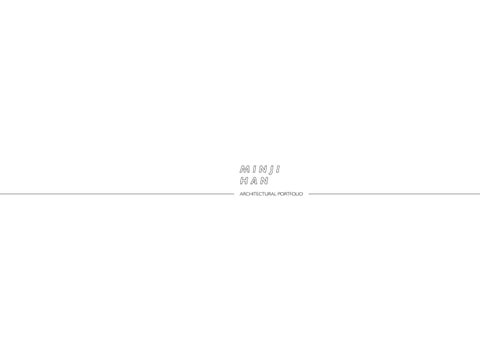 MARCH(PROF) THESIS ABSTRACT Taking up space, whether dead or alive, is only pertinent with the existence of those who seek to remember.Without this fundamental principle of rememberingw, it could be argued that there is almost no purpose for taking up any form of space on this earth. If the notion that we only really die when our names are no longer voiced out loud is true, then the ritual of yearly visitations to loved ones at their burial sites would ensure immortality. This is what the traditional Korean ritual of Jesa is. If in fact it is true that paying respect to the dead by speaking aloud their names and memories made together is an assurance of eternal life, this truth would only be for certain until the death of the next generation of humans and so on.

The Architectâ&amp;#x20AC;&amp;#x2122;s Picnic is about the journey towards the paramount element of the living from a place of dead - the shift from confinement to consumption, and to go from an architecture of enclosure to quite the opposite, the architecture of revelation. A substantial amount of personal perception and judgment was vital to decode a form of architectural interpretation. Therefore, the necessary research components came to be largely personal and intuitive rather than detached and unbiased.This is an investigation of the culture I was exposed to for a short, brief moment in my early childhood and more significantly, my early adulthood. Its core consists of four main elements This architectural interpretation bears from the critical question of being an - the blanket, the mound, the basket of food and the dead. immigrant, understanding by way of custom and ritual what is appropriate to leave and to bring.This examination lies in none other than the desire for the permanence of life, through the fundamental consumption of food, merging with the relinquishment of a stagnant afterlife.The synergy of the two groups, the living and the dead, displays a controversial yet captivating relationship through the act of a ritual. It is an exchange that this thesis aims to investigate. SUPERVISOR: How do we know when a custom has expired? Is there an appropriate and MICHAEL Oâ&amp;#x20AC;&amp;#x2122;SULLIVAN respectable manner in which to dismiss an ingrained tradition, all the while SITE: being introduced to yet another formality? Perhaps one way is through the SYMONDS STREET CEMETERY representation by way of a physical embodiment of a narrative. This thesis PROGRAMME: aims to do just this through the introduction of a foreign presence in the EXTENSION OF CEMETERY existing urban landscape of Auckland City - by means of an extension of the + RESTAURANT

MARCH(PROF) THESIS FURNITURE DESIGN Through the process of designing, making and redesigning, these four stools developed into very symbolic, representative features of my thesis research. For the most comprehensive architectural investigation to take place, it was necessary to hone down to this reductive form of architecture in order to support the critical question, program, brief, land and architecture. The most basic shape of architecture, next to the human body, is the chair, after all â&amp;#x20AC;&amp;#x153;furniture is halfway between architecture and the bodyâ&amp;#x20AC;? and furthermore, a stool is halfway between the sitting and standing figure of the body. It was only upon succeeding the completion of Stool One, that the chair retired from ornamental form to a personal form. The physical forms of each stool became one with the critics, at the time of the final review, held in a form of restriction by myself and this research.

ADVANCED DESIGN II BRIEF The ever-present student body on Symonds Street could be the answer to the almalgamation of the two former doctorsâ&amp;#x20AC;&amp;#x2122; residences. Though, with the addition of the whole new rooftop space on top of 86 Symonds Street that is open to the public as a multi-functional space, it is not limited to just one demographic. The tunnel attempts to bring people in and up into the new student hub.

DESIGN FOUR BRIEF Considered the winning project of the Festival of Transitional Architecture (FESTA) 2014, this group project featured hundreds of hanging, hand-knitted sleeves carrying water balloons filled with LED lights. These moving stalactites invited people into their midst, more so when the sun set behind the clouds and the balloons took on their true form of glowing orbs. The notion behind this installation was the seismic waves of the Christchurch earthquake of 2011. Orbis is able to look beyond its horrifying aftermath into a more positive light. It was organic and inviting, setting users up for an abstracted, imaginative experience - detaching and constrasting to the devastating consequences of the event.