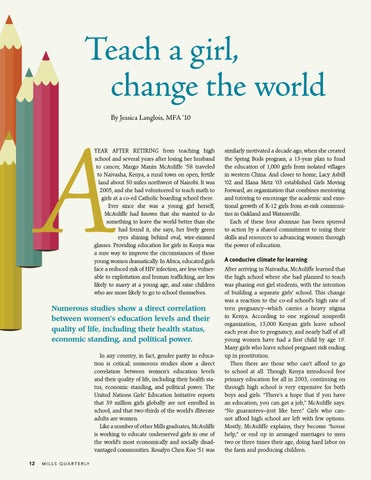 Teach a girl, change the world By Jessica Langlois, MFA ’10

year after retiring from teaching high

similarly motivated a decade ago, when she created

school and several years after losing her husband

the Spring Buds program, a 13-year plan to fund

the education of 1,000 girls from isolated villages

to Naivasha, Kenya, a rural town on open, fertile

in western China. And closer to home, Lacy Asbill

land about 50 miles northwest of Nairobi. It was

2005, and she had volunteered to teach math to

Forward, an organization that combines mentoring

girls at a co-ed Catholic boarding school there.

and tutoring to encourage the academic and emo-

Ever since she was a young girl herself,

McAuliffe had known that she wanted to do

ties in Oakland and Watsonville.

something to leave the world better than she

Each of these four alumnae has been spurred

had found it, she says, her lively green

to action by a shared commitment to using their

skills and resources to advancing women through

glasses. Providing education for girls in Kenya was a sure way to improve the circumstances of those

the power of education.

A conducive climate for learning

face a reduced risk of HIV infection, are less vulner-

After arriving in Naivasha, McAuliffe learned that

able to exploitation and human trafficking, are less

the high school where she had planned to teach

likely to marry at a young age, and raise children

was phasing out girl students, with the intention

who are more likely to go to school themselves.

of building a separate girls’ school. This change was a reaction to the co-ed school’s high rate of

Numerous studies show a direct correlation between women’s education levels and their quality of life, including their health status, economic standing, and political power.

teen pregnancy—which carries a heavy stigma in Kenya. According to one regional nonprofit organization, 13,000 Kenyan girls leave school each year due to pregnancy, and nearly half of all young women have had a first child by age 19. Many girls who leave school pregnant risk ending

In any country, in fact, gender parity in educa-

Then there are those who can’t afford to go

to school at all. Though Kenya introduced free

and their quality of life, including their health sta-

primary education for all in 2003, continuing on

through high school is very expensive for both

boys and girls. “There’s a hope that if you have

that 39 million girls globally are not enrolled in

an education, you can get a job,” McAuliffe says.

school, and that two-thirds of the world’s illiterate

not afford high school are left with few options.

is working to educate underserved girls in one of

help,” or end up in arranged marriages to men

the world’s most economically and socially disad-

two or three times their age, doing hard labor on

the farm and producing children. 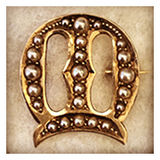