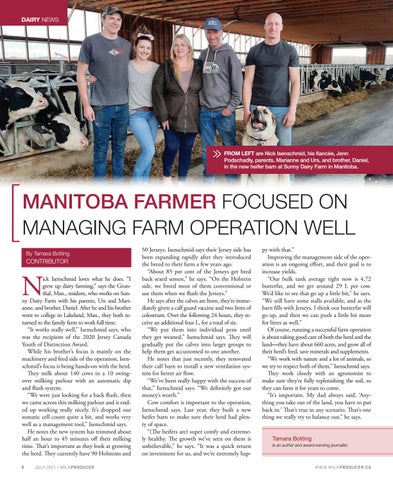 FROM LEFT are Nick Isenschmid, his fiancée, Jenn Podschadly, parents, Marianne and Urs, and brother, Daniel, in the new heifer barn at Sunny Dairy Farm in Manitoba.

ick Isenschmid loves what he does. “I grew up dairy farming,” says the Grunthal, Man., resident, who works on Sunny Dairy Farm with his parents, Urs and Marianne, and brother, Daniel. After he and his brother went to college in Lakeland, Man., they both returned to the family farm to work full time. “It works really well,” Isenschmid says, who was the recipient of the 2020 Jersey Canada Youth of Distinction Award. While his brother’s focus is mainly on the machinery and feed side of the operation, Isenschmid’s focus is being hands-on with the herd. They milk about 140 cows in a 10 swingover milking parlour with an automatic dip and flush system. “We were just looking for a back flush, then we came across this milking parlour and it ended up working really nicely. It’s dropped our somatic cell count quite a bit, and works very well as a management tool,” Isenschmid says. He notes the new system has trimmed about half an hour to 45 minutes off their milking time. That’s important as they look at growing the herd. They currently have 90 Holsteins and

50 Jerseys. Isenschmid says their Jersey side has been expanding rapidly after they introduced the breed to their farm a few years ago. “About 85 per cent of the Jerseys get bred back sexed semen,” he says. “On the Holstein side, we breed most of them conventional or use them when we flush the Jerseys.” He says after the calves are born, they’re immediately given a calf guard vaccine and two litres of colostrum. Over the following 24 hours, they receive an additional four L, for a total of six. “We put them into individual pens until they get weaned,” Isenschmid says. They will gradually put the calves into larger groups to help them get accustomed to one another. He notes that just recently, they renovated their calf barn to install a new ventilation system for better air flow. “We’ve been really happy with the success of that,” Isenschmid says. “We definitely got our money’s worth.” Cow comfort is important to the operation, Isenschmid says. Last year, they built a new heifer barn to make sure their herd had plenty of space. “(The heifers are) super comfy and extremely healthy. The growth we’ve seen on them is unbelievable,” he says. “It was a quick return on investment for us, and we’re extremely hap-

py with that.” Improving the management side of the operation is an ongoing effort, and their goal is to increase yields. “Our bulk tank average right now is 4.72 butterfat, and we get around 29 L per cow. We’d like to see that go up a little bit,” he says. “We still have some stalls available, and as the barn fills with Jerseys, I think our butterfat will go up, and then we can push a little bit more for litres as well.” Of course, running a successful farm operation is about taking good care of both the herd and the land—they have about 660 acres, and grow all of their herd’s feed, save minerals and supplements. “We work with nature and a lot of animals, so we try to respect both of them,” Isenschmid says. They work closely with an agronomist to make sure they’re fully replenishing the soil, so they can farm it for years to come. “It’s important. My dad always said, ‘Anything you take out of the land, you have to put back in.’ That’s true in any scenario. That’s one thing we really try to balance out,” he says. Tamara Botting is an author and award-winning journalist.