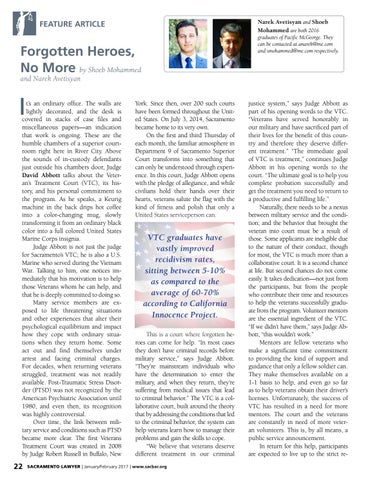 Narek Avetisyan and Shoeb Mohammed are both 2016

graduates of Pacific McGeorge. They can be contacted at anarek@me.com and smohammed@me.com respectively.

Forgotten Heroes, No More by Shoeb Mohammed and Narek Avetisyan

t’s an ordinary office. The walls are lightly decorated, and the desk is covered in stacks of case files and miscellaneous papers—an indication that work is ongoing. These are the humble chambers of a superior courtroom right here in River City. Above the sounds of in-custody defendants just outside his chambers door, Judge David Abbott talks about the Veteran’s Treatment Court (VTC), its history, and his personal commitment to the program. As he speaks, a Keurig machine in the back drips hot coffee into a color-changing mug, slowly transforming it from an ordinary black color into a full colored United States Marine Corps insignia. Judge Abbott is not just the judge for Sacramento’s VTC; he is also a U.S. Marine who served during the Vietnam War. Talking to him, one notices immediately that his motivation is to help those Veterans whom he can help, and that he is deeply committed to doing so. Many service members are exposed to life threatening situations and other experiences that alter their psychological equilibrium and impact how they cope with ordinary situations when they return home. Some act out and find themselves under arrest and facing criminal charges. For decades, when returning veterans struggled, treatment was not readily available. Post-Traumatic Stress Disorder (PTSD) was not recognized by the American Psychiatric Association until 1980, and even then, its recognition was highly controversial. Over time, the link between military service and conditions such as PTSD became more clear. The first Veterans Treatment Court was created in 2008 by Judge Robert Russell in Buffalo, New

York. Since then, over 200 such courts have been formed throughout the United States. On July 3, 2014, Sacramento became home to its very own. On the first and third Thursday of each month, the familiar atmosphere in Department 9 of Sacramento Superior Court transforms into something that can only be understood through experience. In this court, Judge Abbott opens with the pledge of allegiance, and while civilians hold their hands over their hearts, veterans salute the flag with the kind of fitness and polish that only a United States serviceperson can.

VTC graduates have vastly improved recidivism rates, sitting between 5-10% as compared to the average of 60-70% according to California Innocence Project. This is a court where forgotten heroes can come for help. “In most cases they don’t have criminal records before military service,” says Judge Abbott. “They’re mainstream individuals who have the determination to enter the military, and when they return, they’re suffering from medical issues that lead to criminal behavior.” The VTC is a collaborative court, built around the theory that by addressing the conditions that led to the criminal behavior, the system can help veterans learn how to manage their problems and gain the skills to cope. “We believe that veterans deserve different treatment in our criminal

justice system,” says Judge Abbott as part of his opening words to the VTC. “Veterans have served honorably in our military and have sacrificed part of their lives for the benefit of this country and therefore they deserve different treatment.” “The immediate goal of VTC is treatment,” continues Judge Abbott in his opening words to the court. “The ultimate goal is to help you complete probation successfully and get the treatment you need to return to a productive and fulfilling life.” Naturally, there needs to be a nexus between military service and the condition; and the behavior that brought the veteran into court must be a result of those. Some applicants are ineligible due to the nature of their conduct, though for most, the VTC is much more than a collaborative court. It is a second chance at life. But second chances do not come easily. It takes dedication—not just from the participants, but from the people who contribute their time and resources to help the veterans successfully graduate from the program. Volunteer mentors are the essential ingredient of the VTC. “If we didn’t have them,” says Judge Abbott, “this wouldn’t work.” Mentors are fellow veterans who make a significant time commitment to providing the kind of support and guidance that only a fellow soldier can. They make themselves available on a 1-1 basis to help, and even go so far as to help veterans obtain their driver’s licenses. Unfortunately, the success of VTC has resulted in a need for more mentors. The court and the veterans are constantly in need of more veteran volunteers. This is, by all means, a public service announcement. In return for this help, participants are expected to live up to the strict re- 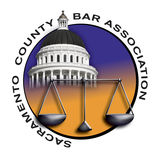