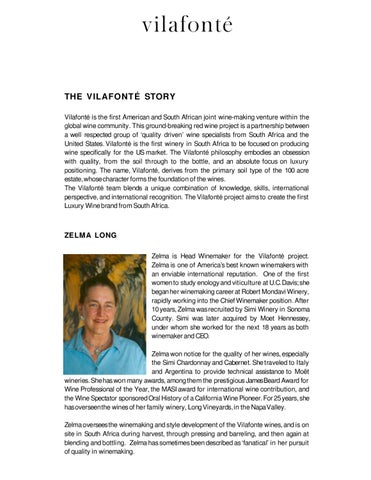 THE VILAFONTÉ STORY Vilafonté is the first American and South African joint wine-making venture within the global wine community. This ground-breaking red wine project is a partnership between a well respected group of ‘quality driven’ wine specialists from South Africa and the United States. Vilafonté is the first winery in South Africa to be focused on producing wine specifically for the US market. The Vilafonté philosophy embodies an obsession with quality, from the soil through to the bottle, and an absolute focus on luxury positioning. The name, Vilafonté, derives from the primary soil type of the 100 acre estate, whose character forms the foundation of the wines. The Vilafonté team blends a unique combination of knowledge, skills, international perspective, and international recognition. The Vilafonté project aims to create the first Luxury Wine brand from South Africa.

ZELMA LONG Zelma is Head Winemaker for the Vilafonté project. Zelma is one of America’s best known winemakers with an enviable international reputation. One of the first women to study enology and viticulture at U.C. Davis; she began her winemaking career at Robert Mondavi Winery, rapidly working into the Chief Winemaker position. After 10 years, Zelma was recruited by Simi Winery in Sonoma County. Simi was later acquired by Moet Hennessey, under whom she worked for the next 18 years as both winemaker and CEO. Zelma won notice for the quality of her wines, especially the Simi Chardonnay and Cabernet. She traveled to Italy and Argentina to provide technical assistance to Moët wineries. She has won many awards, among them the prestigious James Beard Award for Wine Professional of the Year, the MASI award for international wine contribution, and the Wine Spectator sponsored Oral History of a California Wine Pioneer. For 25 years, she has overseen the wines of her family winery, Long Vineyards, in the Napa Valley. Zelma oversees the winemaking and style development of the Vilafonte wines, and is on site in South Africa during harvest, through pressing and barreling, and then again at blending and bottling. Zelma has sometimes been described as ‘fanatical’ in her pursuit of quality in winemaking.

Vilafonté Managing Partner is Michael Ratcliffe. Mike qualified as a

business major before attending the University of Adelaide and was in the first graduating class for the Graduate Diploma in Wine Marketing. Mike is Managing Director of his family estate, Warwick which is recognized as one of South Africa’s foremost wine estates.

Mike is a leader in the Cape wine industry. In 1997 he founded Rootstock - an organisation dedicated to the upliftment and education of the youth of the wine industry with a practical focus on marketing and management . Mike was a board member of WOSA, (Wines of South Africa) the generic export promotion board for the SA Wine Industry for 5 years and has participated actively on the marketing committee of the Stellenbosch Wine Route. Mike has been keenly involved in black economic empowerment and land redistribution as Deputy-Chairman of the South African Wine Industry trust. Mike is President of the United States/South Africa foundation, a registered 301(C) non-profit fundraising charity based in Washington DC. Mike is a regular international wine judge, industry commentator and marketing coordinator.

DR. PHILLIP FREESE Phil is head ‘Wine-grower’ and creator of the Vilafonté vineyard which he calls “Different by Design”. Phil spent 13 years as Robert Mondavi’s Vice-President of Wine Growing. Phil designed the first Opus One vineyards, and initiated the remote sensing project with NASA that has spawned a new wave of tools for viticulture analysis and quality enhancement. Subsequently, he established his own Viticultural Practice, and in the last decade has consulted to some California’s best, including Cakebread, Far Niente, Seghesio, and Robert Mondavi’s Byron Winery. Important to his understanding of South African terroir has been his consulting work with key wineries there, including Warwick, Rustenberg, Thelema and De Wetshof. Phil is responsible for the strategic direction of all Vilafonté wine-growing and vineyard development operations.

Series C 2006 â&amp;#x20AC;&amp;#x153;Powerful yet elegantâ&amp;#x20AC;? The 2006 vintage was characterized by the smallest berries experienced to date leading to extremely deep, concentrated wines. The 2006 Series C is as powerful as the 2005 regarding fruit concentration, but more refined and elegant in structure due to the higher percentage of Merlot in this blend (40%), coupled with gentler extraction techniques. Stylistically the C is showing silky tannins and upfront fruit. It is deep and concentrated with multiple layers of dark chocolate, espresso bean, blackberry and dark cherry flavors. On the entry the structure is elegant, with a focused and concentrated mid palate that gradually builds to a long, supple, yet focused finish. Deep, dark oak flavors integrate with primary and secondary fruit flavors to deliver a harmonious, balanced wine with great aging potential. After one year in bottle, the wine has already started to show its inherent complexity and will increasingly do so over the next 8-10 years, then likely hold for another 10 years. Series C will fit well now with intense flavored red meat and game, yet will reward hugely a cellaring period of 1-2 years. Cabernet Sauvignon Merlot Cabernet Franc Alcohol Production in barrels Ageing Yeast

The character of the Series M 2006 is driven by the combination of Merlot and Malbec at 53%. The larger grapes lend to more fruit forward characters and silky tannins and add to the lushness of this blend. The wine is rich and accessible, but have a deep backbone and core provided by 44% Cabernet Sauvignon. The early part of 2006 harvest was characterized by warm and windy conditions. These conditions, coupled with the extremely small berry sizes made the Merlot very concentrated, yet more fruit forward than in previous years. Its aromatics are open and inviting. This wine characteristically shows black cherry jelly, dried flowers, hints of almonds and pine nuts. M has a silky entrance on the palate, very even weight for its whole length, and some “fruit sweetness” in its middle and finish; even some chewy milk chocolate notes. The Series M 2006 is the perfect combination of elegance, supple fruitfulness and hidden concentration. Merlot Malbec Cabernet Sauvignon Cabernet Franc Alcohol Production in barrels Ageing Yeast

Weather: Dry, windy and warm in January with a hot start to the vintage. The rest of the harvest saw cool nights with some rain towards end of harvest. A hot spell towards the end of harvest in March brought the last Cabernet blocks home.

BELGIUM: Vilafonté takes Gold at the Concours Mondial Vilafonté Series C 2005 was awarded the elusive GOLD medal by 240 wine professionals judging in Europe’s biggest wine competition in Brussels. The jury is composed solely of professional tasters, oenologists, sommeliers, journalists and renowned experts in the field of wine. A GOLD medal reflects a wine scoring up to 95.9 points on the 100 point scale.

South Africa: Platter awards Vilafonté 5 stars Vilafonté ‘Series C’ 2006 was awarded 5 stars in the John Platter Wine guide. Thousands of South African wines were evaluated, but only a handful reached the pinnacle of Platter quality – the classic 5 star rating. This is widely acknowledged as the highest award that a wine can receive in South Africa.

USA: Michael Franz Wine of the Year Acclaimed American critic Michael Franz, the long-time wine editor of the Washington Post named Vilafonté Series M as his International ‘Wine of the Year’ for 2008 on Wine Review Online. He scored the wine 95 points.

90 Points from Tanzer – again! Our 2005 Vilafonte Series C was again awarded 90 points by Steve Tanzer in ‘The International Wine Cellar’ in February 2009. This continues the long-standing support for our wines by this esteemed critic.