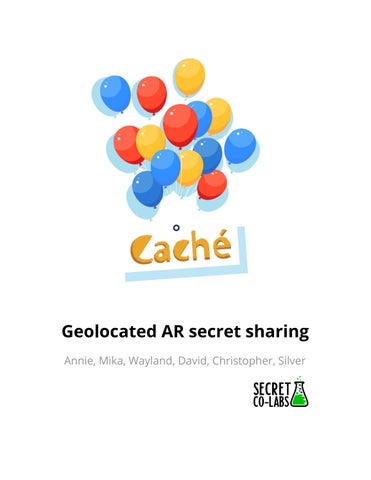 For the second portion of the Projects 1 course in the MDM program at the Centre for Digital Media we, Secret Co-Lab (Team 7), were tasked to create a secret sharing application that requires either augmented reality, virtual reality, or mixed reality techniques. The team created a geo-location based augmented reality (AR) prototype for Android and IOS devices. Users can view secrets in AR space and/or share their own secrets when they sign up with an account. Users will have to find and collect geo-located balloons to send and receive these secrets. Development was done in Unity3D with the Mapbox platform and Vuforia AR tools.

Project Brief “A game company would like an MDM Student team to explore interactive emerging technologies such as AR, MR, or VR to develop a secret sharing experience. The users will be anonymous or possibly avatars that can chat with other players. There can be multiple secrets and clues. The client would be open to a virtual world where players would guess which avatar or player is generating a particular secret. Or it could be a game that is location based. There could be an element of challenging the secret teller in a “truth or dare” mechanic

Deliverable would be a working prototype, art assets and full documentation of the prototype development with a strategy for future development in mind.”

5 Server and Database: to store user data UX research: Finding out how our users can user our application in the most efficient way.

We inspire by agile-workflow and implement scrum framework into our project management process. In order to ensure our team have continuous progress, we do weekly sprints with the spirit that “try and fail as many times as we can.”

Team Rules Work fun, play hard! Show up in the meetings. If you cannot show up in a meeting, proactively ask for tasks to make contribution. 60% perfection is fine, move to the next tasks and don’t go back. Attitude is the key, show respect to your teammates in terms of their hard work and their time.

Week 1-2 The team is assigned with a brief to use AR, VR, or MR technology to create a secret sharing experience. In the first meeting, team discussed the possibilities and capabilities of using different interactive emerging technologies for this product. Then the team members did some researches on their own on current existing products relate to secret sharing experience. During the second meeting, the team discussed on their individual researches and established the idea. After the two meetings, the basic idea was established. The idea is to create a message in the bottle liked application which uses the AR and geolocation technology. People should be able to leave and read location-based secrets by using AR camera. Comparing to VR and MR, AR technology has more mobility and is more accessible to a larger amount of users since most smartphones nowadays support AR. Geolocation technology is used to record the location where the secrets are left. We assume that by having location-based secrets would encourage people to go out.

After establishing the basic idea, we conduct a paper prototype to study for our user. We put some campaign posters inside CDM community and ask student in the community to get involve and share their secrets use sticky notes. The purpose of this prototype is to discover: How people will react after seeing our prototype? ● What kind of message people will share within the community? ● How will people interact after finding out others’ secret shared on the wall? ●

After three days of collecting data, we found: People are more willing to share secrets using common language or about common knowledge ● People are willing to interact with other’s secrets ●

Our next step is to share or see secrets in different location.

Second User Study From the first user study, we conducted another MVP for further study. We designed a scavenger hunt game which asks student in CDM go to different places around CDM and collect the preset secrets which we collected among CDM cohort. Secrets have different colours, whoever collects four colour of secrets will receive a reward. Our assumptions are: People will be more willing to share secrets via digital methods. ● People are willing to go to different locations, which they may not visit normally, to explore secrets. ● Rewards and collections will give people more motivation to explore and share secrets. ●

Our observations are: Our users expect to see secret balloons once they approach a beacon. ● Some of them collected balloons for rewards while others just collected them for fun. ● Most people went to the beacons nearby to check it out. Only those aggressive players will go as far as needed to gather all colours of secret balloons for rewards. ● people tend to visit the nearest position like project room 1 and audio room ●

From our observation, we divide our potential user group into three different categories: Secret Sharer: love to share their secrets ● Secret Consumer: enjoy to see others’ secrets but don’t necessarily share their own ● Treasure Hunter: collect secrets in order to achieve the goal ●

Beta Testing From our user study, we were able to develop our first UI Prototype and Unity prototype. 3.5.1 UI Prototype Version 1.0

For the first UI prototype, it focuses on a tutorial streamline more based on user journey. It shows the process of how users find the beacon, collect balloons and send their secret. But after being launched on the beta test, this version got some feedback, saying that user flow is unclear which made users confused. Also, the outlook of icons are not related to the functions behind and some functions overlapped. Thus we improved the wireframe flow and changed the icons.

In the prototype, people will have a input interface, where the user can input their secret. 2. AR Camera page

After the user input the message and press send button, it will go to the AR camera page. 3. Place a plane

In the AR camera page, there is a plane finder interface, once the user find a plane and click on it, it will generate a box on the plane.

After 4 seconds, the lid will open, a balloon will float out with a secret attach to it. The Unity prototype demonstrate the ability of using AR to hide secrets, however, right now we can’t demonstrate the geolocation due to the lack of resources. 3.6

As a secret sharing AR application, the overall art design will deliver a more fun and relax user experience. Thus more bright, high-saturation colour is used to enrich the overall outlook. Unlike Pokemon Go or other AR app, ours use a flat 2D design on the user interface to create a more childlike， relaxed game experience.

A high-saturation colour palette is designed based on our “balloon” theme. Different shades of blue are used as the sky tone and other bright colours as balloons.

4.6.1 Overview The user interface is designed based on the user journey. Users can interact with the buttons to find/send a secret on the screen. Collect history and individual gallery are also provided to

4.6.2 Splashing Screen An animated splashing screen shows first where the brand logo comes up with balloons.

4.6.3 Main Menu The main menu of our product is the map based on users’ location. Users can see where they are on the map and beacons nearby. When users tap the beacon, the camera function will be on so that they can search balloons around them. The main menu button is also offered. By activating the main menu button, three icons will show up, which will lead to three different interfaces.

4.6.4 Camera By going to the beacon physically and tap the beacon on screen, camera function will be activated. Users can see virtual balloons and the secrets through their cameras. They are able to take a picture with the balloon and share it with other social media or leave if they don’t like the secret. Users can also collect the balloon by poking it on the screen.

18 4.6.5 Sending Secrets The sending screen allows users to write down their own secrets anonymously. A canvas system is under development where users can add drawing to their secrets. The fonts are fixed for now but more fonts will be imported to add more fun to this app.

4.6.6 - Gallery The gallery is where users can check all the balloons and secrets they have collected. Seasonal ballon collecting activities will be promoted to enrich balloon diversities. Users can also receive awards if they have collected a certain amount of balloons.

4.6.7 Badge &amp; Rewards Every time the user has collected/sent secrets, they will receive feedback, which may encourage them to collect/share more. Badges are also offered when users have collected a certain amount of balloons.

On 22 November 2018 3 ​ 7​ users at the CDM, including students, faculty, and invited guests, tested our functional prototype UI and digital prototype beta. How often would you use this app? On a scale of 1 (never) to 5 (multiple times a day), the mean average answer was ​3.1​. This approximates to about o ​ nce every day or two​. Where would you use this app? (include multiple places) Not surprisingly, a g ​ reat variety of locations​ ​was mentioned, ranging from the CDM (= a community space), school, malls, transit locations, restaurants, social events, homes, and public places. What type(s) of secrets would you share? (for example, funny stories, gossip, confessions, etc.) 19 mentioned funny stories, 11 mentioned gossip, 8 mentioned confessions, and others were miscellaneous but overwhelmingly l​ ight-hearted or entertaining​. What was your favourite feature of the app? With 27 mentions, the vast majority of people described liking the ​AR balloon experience a​nd animation, which is perhaps not surprising as it is the only functional part we had ready. 3 mentioned collecting secrets, and 3 mentioned the experience of searching for secrets in a room or location. Were you able to go through the FIRST part (e.g., go through the screens) of the digital prototype without difficulty? 23 says yes​, 4 said “Ran into some issues”, 3 said “No”, and 7 described issues. If you did run into some issues, where did you find yourself experiencing this? (skip this if otherwise) 12 answered, and the overall feeling was ​confusion about the instructions​ with not enough information.

20 Were you able to go through the SECOND part (e.g., the augmented reality portion) of the digital prototype without difficulty? 24 said yes,​ 11 said “I ran into some issues”, and 2 said “No” If you did run into some issues, where did you find yourself experiencing this? (skip this if otherwise) 21 answered, and the majority expressed ​confusion regarding having to place the secret on a flat surface,​ and several wanted more information or instructions.

a platform they can use as an outlet

find the most popular secret/limited edition

be willing to explore more and love collecting

6. Plans for future development and sustainability

7 Plans for future development and sustainability