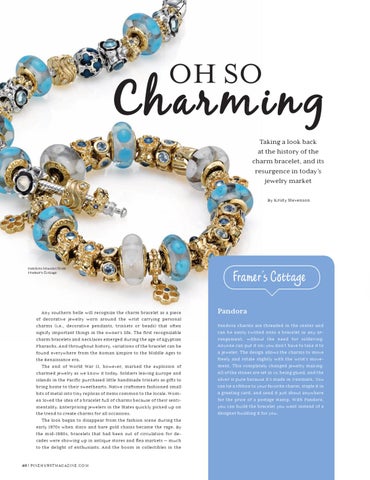 Charming Taking a look back at the history of the charm bracelet, and its resurgence in today’s jewelry market By Kristy Stevenson

Any southern belle will recognize the charm bracelet as a piece of decorative jewelry worn around the wrist carrying personal charms (i.e., decorative pendants, trinkets or beads) that often signify important things in the owner’s life. The first recognizable charm bracelets and necklaces emerged during the age of Egyptian Pharaohs. And throughout history, variations of the bracelet can be found everywhere from the Roman Empire to the Middle Ages to the Renaissance era. The end of World War II, however, marked the explosion of charmed jewelry as we know it today. Soldiers leaving Europe and islands in the Pacific purchased little handmade trinkets as gifts to bring home to their sweethearts. Native craftsmen fashioned small bits of metal into tiny replicas of items common to the locale. Women loved the idea of a bracelet full of charms because of their sentimentality. Enterprising jewelers in the States quickly picked up on the trend to create charms for all occasions. The look began to disappear from the fashion scene during the early 1970s when disco and bare gold chains became the rage. By the mid-1980s, bracelets that had been out of circulation for decades were showing up in antique stores and flea markets — much to the delight of enthusiasts. And the boom in collectibles in the

Framer’s Cottage Pandora Pandora charms are threaded in the center and can be easily twisted onto a bracelet in any arrangement, without the need for soldering. Anyone can put it on; you don’t have to take it to a jeweler. The design allows the charms to move freely and rotate slightly with the wrist’s movement. This completely changed jewelry making. All of the stones are set in vs. being glued, and the silver is pure because it’s made in Denmark. You can tie a ribbon to your favorite charm, staple it in a greeting card, and send it just about anywhere for the price of a postage stamp. With Pandora, you can build the bracelet you want instead of a designer building it for you.